Janine Dunkel
Knew it wasn&#39;t Tahquamenon Falls, been there, awesome falls and park. Love the U.P.! 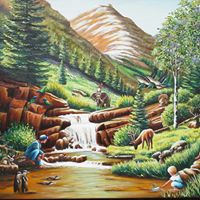 Marian Spitzig
Used to go almost every year when I was a kid. It was so neat to see the falls when they diverted the river from the American Falls to see what they could do about erosion control, etc back in the 1960s.
Author:
\\ZaiN//
Writer