In which English county can you see a signpost that reads Ham ½ mile, Sandwich 3 miles?

Ham is a hamlet near the town of Sandwich in Kent, England, within the parish of Northbourne. The population is included in the civil parish of Eastry. There is a signpost nearby which points to both the hamlet and the town, thus appearing to read "Ham Sandwich".

Kent is a county in South East England and one of the home counties. It borders Greater London to the north-west, Surrey to the west and East Sussex to the south-west. The county also shares borders with Essex along the estuary of the River Thames (connected by land via High Speed 1 and the Dartford Crossing), and with the French department of Pas-de-Calais through the Channel Tunnel. The county town is Maidstone. Jo Farrell
That’s where we get the name sandwich from, for our food sandwiches. The Earl of Sandwich didn’t want to leave the card table while playing cards. So he put his food and bread together in a pile and “hey presto “, a sandwich was born. That is what we were taught at school in neighbouring Ramsgate.

Chrissie
Love that one, deborahpmercer! In Lincolnshire you also have Spital-in-the-Street. I drove through it once, and laughed so much that I was barely safe at the wheel.

Chrissie
Paula Woodley, but is there a Sandwich in Surrey, and within 2.5 to 3.5 miles of your Ham? 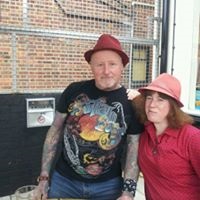 Paula Woodley
Ham is next to Kingston which is part of Surrey nowhere near Kent, i should know I&#39;ve been living here all my life 50+ years.

Sandie de Rougemont
Yup, it&#39;s just up the road from me. I couldn&#39;t possibly get that wrong!

Val Wilkinson
Beautiful part of England! If I recall correctly that sign is by a very old church

John McLardie
Lived in Dover for 16 years and visited a lot of the Kent towns, villages and hamlets. They don&#39;t call it the &#39;Garden of England&#39; for nothing.

Chris Braid
Good Q and A. Knew Sandwich wS in Kent so took a punt! 😀

deborahpmercer
Great question! I live in Lincolnshire, which has the famous sign &quot;To Mavis Enderby and Old Bolingbroke&quot; to which (possibly apocryphally!) someone once added &quot;a healthy daughter&quot;!

Chriss Crockford
I was born in Kent

Jo Farrell
I’m from that area so couldn’t get that one wrong. 😄

Sally Onyett
I’m in Kent so had an idea. Never heard of Ham tho. The place that is..! 😜
Author:
Stevie G
Writer