In which movie does Bruce Lee as Tang Lung go to Rome to help save the family restaurant?

The 1972 film "Return of the Dragon" (aka, "The Way of the Dragon") has Bruce Lee fighting Chuck Norris and many martial arts. Enthusiasts now consider this film to be the best Bruce Lee movie. It gives the martial arts master ample opportunity to demonstrate his unique abilities against some of his best opponents like Norris. This is where Norris has his debut screen role.

In the film, Tang Lung (Lee) travels to Rome. He has been summoned to the city to help his restaurateur cousin fend off some local syndicate's extortion demands. Tang refuses to knuckle under, making short work of knife-wielding hoods and everyone else the mob can toss at him, including one of the main villains, Colt (Norris).

"Return of the Dragon" is Bruce Lee's last kung fu picture where he kicks an enemy into oblivion with his flying feet, grunting, and screaming while triumphantly, achieving suspenseful pauses between blows and winning all needed objectives. The film was directed by Bruce Lee and its screenplay was written by him. This is Lee's only complete directorial film. The film editor was Chang Yao Chang; the cinematographer was Ho Lang Shang, and music was created by Ku Chia-Hui. The film's production was handled by Lee, Kuam Chih Chung, and Chang-Ying Peng. Bryanston Pictures released the film worldwide in May 1974. Greg Sanza
WRONG!!! The Way of the Dragon!!!

lls
I remembered this from my brother...thx, bro! :)

picciolimirco
The answer given here is wrong as the release in England at least was titled the way of the dragon and we are in England aren’t we, so to be correct, this should have been one of the options given. 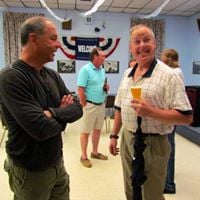 Eric Arvidson
Error in the grammar of the first paragraph,&quot;.and many martial arts. Enthusiasts now consider&quot;

Pat Salloum
I knew it as the Way of the Dragon...

Allan Orton
I have &quot;Way of the Dragon&quot; on DVD

Kim Hernandez
I think way of the dragon is a better choice
Author:
E11-Hitman
Writer