The classic television show “I Love Lucy” debuted on the CBS network on October 15th of 1951. The show starred comedienne Lucille Ball, Cuban entertainer Desi Arnez as Lucy’s husband Ricky, with Vivian Vance and William Frawley as their goofy landlords Fred and Ethel Mertz, and it revolved around Lucy’s comical antics. Arnez and Ball were a real-life husband and wife and the show was based off a popular radio series that Ball had previously starred in. “I Love Lucy” was one of the first scripted television shows to be filmed using three different cameras and it was unusual that it was filmed in Hollywood using a live audience rather than in New York using a laugh track. The show was a huge success and was nominated for and won many Emmy awards while it aired. It ended in May of 1957 but remained popular in reruns and it is still regularly aired on cable TV. Bridget O&#39;Hara
Somebody always has to complain about the questions. They&#39;re taking time to write them. If you can do better, do it. 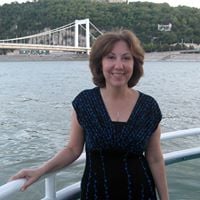 Teri W.
Good question, but Desi’s last name is spelled wrong - should be Arnaz instead of Arnez.

lilysvn
I watched “I Love Lucy”growing up and her later shows too. I even watched the reruns of her shows that first ran before I was old enough to watch. Lucille Ball was AWESOME!

Marianne Frederick Halterman
And there were no &quot;remotes&quot; in 1951.

Pamela Ashton
joan musicmasters, loved her most? Lucy once hosted a luncheon for 9 women, all of whom were having affairs with Desi.

Cedric Walters
When I watch Will &amp; Grace I get the sense that Ms. Messing is related to Mrs. Ball . I was pleased to discovery that Lucy is a socialist . Smart and funny. LOL

gkelly
joan musicmasters, lighten up, kiddo&#39;, she performed what was written for her. Besides that, millions of people think she&#39;s incredibly funny AND talented. The Honeymooners is the one THAT got ME!! Since when is threatening to punch your wife(pow, right to the moon!!)funny?? Never had a nice thing to say about his best friend either.

joan musicmasters
I guessed &quot;Gunsmoke&quot; simply because it is (still) my favorite show. Always disliked &quot;I Love Lucy&quot; greatly, because she was scheming, conniving, rude, loud, majorly untalented, and always playing nasty tricks and being disrespectful of the one who loved her most - her husband Ricky. Jan Ashbaugh
Corey Taylor, They filmed in Hollywood. And they used a live audience. Where have you been?? Robert Improta
Brilliant comedy and I did Live Lucy. Just as fun and funny today!!🤗😁🤣

littledick
Got it. With other possibilities, let&#39;s be honest, a total guess. I can&#39;t remember the exact date any TV show debuted.