The Philippines' location on the Pacific Ring of Fire and close to the equator makes the Philippines prone to earthquakes and typhoons, but also endows it with abundant natural resources and some of the world's greatest biodiversity. The Philippines has an area of 300,000 km2 (120,000 sq mi), according to the Philippines Statistical Authority and the World Bank and, as of 2015, had a population of at least 100 million. As of January 2018, it is the eighth-most populated country in Asia and the 12th most populated country in the world. Approximately 10 million additional Filipinos lived overseas, comprising one of the world's largest diasporas. Multiple ethnicities and cultures are found throughout the islands. Lorenzo Lucia
Interesting facts: the three stars represent the three major islands: Luzon, Visayas and Mindanao. The eight rays of the sun are supposed to represent the original eight provinces that rose up against Spain. And yes, blue stripe up is normal representing peacetime, and red stripe up when the country is at war. Jose Cenal Paran
I knew cause I’m a filipino.. 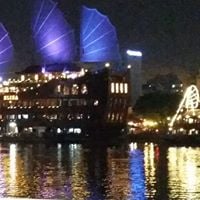 Peter Gilchrist
Many record the island count as 7107

Jennifer Dyster
The explanation contains nothing about the flag

Gerald Larkins
Easy I am a native filipino Marian Clough
Are the colors red white and blue because it use to associated with the US during Roosevelt&#39;s Presidency?

Ralph A. Caya
I knew because I lived there for three years.

Cheryl McMeekin
Thank you Lorenzo for the info about the flag itself!!! Dorothy Harper
That sucks, I picked the Philippians ,but it showed my answer as Vietnam.😖

Brad Schwebler
Korea is not a country. South Korea and North Korea are two separate countries.