To what city do Muslims turn their faces during prayer?

During prayer, Muslims turn to face the Kaaba in Mecca, Saudi Arabia. They face Mecca because it is Muhammad's birthplace and the holiest city of Islam. In 610 CE, Muhammad received the first of his revelations from God on a mountain outside Mecca.

Muslim prayer should be performed five times a day (before sunrise, at noon, in the afternoon, after sunset and at night). On Fridays every Muslim who has reached the age of majority, is required to listen to the sermon in the mosques. All Muslims are encouraged to make the Hajj at least once in their lifetime. The Hajj involves a pilgrimage to Mecca, Saudi Arabia, the birthplace of Islam. 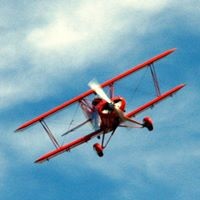 donrgeddes
Unrelated to this particular question and I got trounced the last time I brought it up. My running score usually ranges in 200 to 300 range but I have to wonder if that is any accurate measure since I NEVER look anything up, usually answer in under five seconds, but I am sure that some of the really high scores simply take time to research the answers. Maybe there should be two categories as there is on one other site that only gives you a few seconds. I happen to be more interested in actual recall than research ability.

Alan Waites
as a practising non-religious believer, I accept that people do have a religious belief, regardless of their faith. If they believe then that&#39;s absolutely fine. So when I say I do not have a belief, don&#39;t tell me am wrong. Religion is a man-made myth. However, I do have my very own mantra in which I hope people will follow. &quot;Live your life to the best of your ability&quot; Wise words indeed. Kader Belkharoubi
&quot;During prayer, Muslims turn to face the Kaaba in Mecca.They face Mecca because it is Muhammad&#39;s birthplace and the holiest city of Islam.&quot; No,they face the KAABA from all sides and wherever they are.The KAABA was founded(built) by ABRAHAM,long before the emergence of Islam.

morocconate
I get 1 out of 15 questions wrong, are these questions meant for a specific audience?

picherichard
Mecca is not situated near the old trade routes. I believe the prophet Mohamed was raised by his uncle in Mecca but moved to Madina to the North and returned with his followers and decapitated some seven hundred men outside the gates of Mecca.

Danny
Sadly they turn their rear ends to the holy temple in Jerusalem. And they claim it as holy.

Player
This is Tiffany doing this

Player
Prophet Muhammad (Sallalahu Alayhi Wasallam) was born in Madina not in Mecca where Ka&#39;aba was built by Prophet Ibrahim with son Ismael

catmom
For carriethomas-- I love the color of your rose. All religious should be respected, belief systems, etc.

Tinzi Kriss
I thought they turn towards Mecca, Medina....Madina was in Mecca, wrong???

Armadillo
What is the practice the have where they go out in the rain and pour out a cup of water about and is there a name for it?

ratistotle voielactee
It is important that all cultures learn about the existence of others’ belief systems in order to promote acceptance of those differences so that perhaps this may lead to less hegemoneous acts of aggression stemming from lack of knowledge and fear of others because people appear different....

LaNita Waldo
I’m Christian , lived in Turkey for 4 years, respect everyone’s viewpoint, it’s like options we all have them we are not going to change them, live at peace with one another. ✝️☮️☯️🔯🛐,

LaNita Waldo
I said Mecca, Though I was right....
Author:
Monique Zanini
Writer