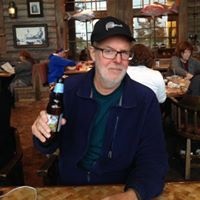 Corey Taylor
I saw it once, and hardly laughed at all. Leo was completely detached from his own family and tried to murder Bob when he bonded with them. What a quack!