What is the most common eye color?

Brown eyes are predominant in humans and, in many populations, it is (with few exceptions) the only iris color present. It is less common in countries around the Baltic Sea and in Scandinavia.
In humans, brown eyes contain large amounts of melanin within the iris stroma, which serves to absorb light, particularly at the shorter wavelengths. Brown eyes are the most common eye color, with over half of the world population having them. They are also the most dominant eye color gene. Very dark brown irises may appear at a glance to be black.

Mike Reidy
If you think about it logically, Asian &amp; African people have dark eyes, which is more than half of the worlds population

Chris Brown
OOPS! I misread the question, not seeing the word &quot;eye&quot;. Too hasty, or a case of &quot;word-blindness perhaps?

Chrissie
Lillian Carol Walls, am jealous - I&#39;ve only got two!

Chrissie
dlujanen, mine are blue, and when I cry they go green. Maybe some kind quizzer will tell us why this happens.

joycekingsmith
Green eyes here and l got it right.

dlujanen
mine are hazel /green..but when im upset they go brown

AprylMc
I know the rarest are green and gray. I have light blue to gray, and so does my Father! 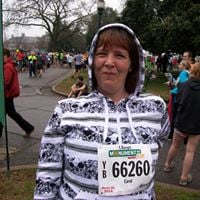 Lillian Carol Walls
Mine are blue, green, and gray.

Donna Smith
Missed it only took a SLIP FROM MY FINGER