What symbol is used for the category "live theatre" on the Hollywood Walk of Fame?

The Hollywood Walk of Fame comprises more than 2,600 five-pointed terrazzo and brass stars embedded in the sidewalks along 15 blocks of Hollywood Boulevard and three blocks of Vine Street in Hollywood, California. The stars are permanent public monuments to achievement in the entertainment industry, bearing the names of a mix of musicians, actors, directors, producers, musical and theatrical groups, fictional characters, and others. The Walk of Fame is administered by the Hollywood Chamber of Commerce and maintained by the self-financing Hollywood Historic Trust.

The name of the honoree is inlaid in brass block letters in the upper portion of each star. Below the inscription, in the lower half of the star field, a round inlaid brass emblem indicates the category of the honoree's contributions. The emblems symbolize five categories within the entertainment industry: 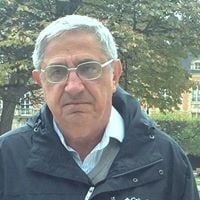 Sergey Boev
These masks can be seen in almost every theater in the world. They represent two muses of ancient Greek mythology - Thalia, the muse of comedy, and Melpomene, the muse of tragedy.

Susannah Landis
Sergey Boev, Thank you for the information. I knew Thalia but not Melpomene.

lollygagger
I wouldn&#39;t call them twin masks. They&#39;re kind of the opposite of each other. Well, I guess they could be fraternal twins

docluci
Two masks are a common inclusion at theaters and other symbols are used to indicate other forms of the performance world.. Edie Koller
The hollywood walk of fame is over rated..some of the sidewalks are cracked and dirty too. Its a darn shame The Hollywood Walk of fame did not start til 1960 either ..a little known fact. I use to love to go there and watch all the tourists too. As I am only 10 miles from there but after almost 59 years of living in California I found it boring.

Irma Rivera
Always has to do with theatre!!!

jshehan
Award bought and paid for by the honoree.

hector tubens
Guessed correctly but never knew they honored theater with the twin masks on the Hollywood Walk of Fame. Learn something new every day.

Darlene Davidson
The twin masks are commonly associated with theatre.