What was the wall that divided a major German city into 2 parts?

The construction of the wall started on August 15th, 1961

This wall separated Germany for 30 years. Because of the strict rules, nobody could pass from East to West Germany.

However, 5000 managed to escape and overcome the wall.

There were known cases when people in stolen vehicles tried crashing into and breaking part of the concrete. Some tried leaping and jumping from buildings along the wall. There were cases when groups tunneled underneath it and some even managed to create a hot-air balloon and travel from one side to another.

The Berlin Wall separated thousands of families in just a matter of days. Some even lost their jobs, so when the order was out to tear down the wall, the East and West Germany united to bring down the wall and use the concrete to raise Germany from its knees.

Bill Coe
Steve McVey, I don&#39;t think Evelyn Forbes&#39; comment was dumbassed at all. Reagan for years challenged the Soviets to &quot;Tear down that wall&quot;. I think the pressure he constantly put on them was a major impetus in them finally tearing it down. The &quot;tear down this wall&quot; speech was not the first time Reagan had addressed the issue of the Berlin Wall. In a visit to West Berlin in June 1982, he&#39;d stated &quot;I&#39;d like to ask the Soviet leaders one question... Why is the wall there?&quot;, and in 1986, 25 years after the construction of the wall, in response to West German newspaper Bild-Zeitung asking when he thought the wall could be &quot;torn down&quot;, Reagan said, &quot;I call upon those responsible to dismantle it [today]. In 1989 it finally came down.

Deb McAfee
I was in Germany when the Berlin wall came down. What a great day that was. 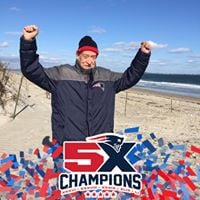 David Comeau
Ridiculous easy question, how did this ever make it appear?

Evelyn Forbes
Thanks to Ronald Reagan, that wall was torn down!