In what year did the catastrophic eruption of Mount Saint Helen occur?

Mount St. Helens (known as Lawetlat'la to the indigenous Cowlitz people, and Loowit to the Klickitat) is an active stratovolcano located in Skamania County, Washington, in the Pacific Northwest region of the United States.

Mount St. Helens is most notorious for its catastrophic eruption on May 18, 1980, at 8:32 a.m. PDT, the deadliest and most economically destructive volcanic event in the history of the United States. Fifty-seven people were killed; 250 homes, 47 bridges, 15 miles (24 km) of railways, and 185 miles (298 km) of highway were destroyed. A massive debris avalanche triggered by an earthquake measuring 5.1 on the Richter scale caused an eruption that reduced the elevation of the mountain's summit from 9,677 ft (2,950 m) to 8,363 ft (2,549 m), replacing it with a 1 mile (1.6 km) wide horseshoe-shaped crater. The debris avalanche was up to 0.7 cubic miles (2.9 km3) in volume. The Mount St. Helens National Volcanic Monument was created to preserve the volcano and allow for its aftermath to be scientifically studied.

earlepg
Drove through the area when there was a subsequent eruption at night. Stayed at a motel overnight and woke up to ash covering the car (and the whole area for miles around). The manager washed our car, but it was still super dirty. Took months to muck most of it out of all the nooks and crannies. Still some clinging on when we sold it. Finally picked up some souvenir ash while driving home though the Oregon coast. Made for an interesting trip.

Douglas VanLuttervelt
Lived in Duncan B.C. on Vancouver Island at the time of the St. Helens eruption. Ash had landed on our house and vehicles from that distance. We were able to clean most of the ash up and the rain helped to wash the ash away.

earlepg
Isabel Laing, Super easy for those who knew the mountain blew.

leeiskentuckysways
My son had an allergic reaction to the ash when it passed over Kentucky. Him and 12 other children. He swelled up so bad I could barely recognize him. Hospitalised for a week.

larrywagner
I was selling bottles of my grill ash as mount st Helens ash, from New Jersey. Only kidding, don&#39;t have a cow. lol. 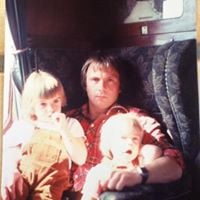 Johnandyvonne Cunningham
A massive debris avalanche? Surely you mean a pyroclastic flow. I believe the first one ever filmed. It helped with the understanding of what happened at Pompey

Christopher Neal Wigley
My sister was living in the path of the volcanic ash. Pretty scary, and the ash was pretty deep, upwards of 4-5 inches.

Val Wilkinson
I remember it well- affected weather globally so you could hardly miss it. Poor sods Bob deRoos
I was there.

patrhea
Been there, breathe taking to see!

Annie
I remember it well.

Isabel Laing
I remember it all the other dates were too early.