Where is the tourism attraction, Knott's Berry Farm located?

In 2018, it was the twelfth-most-visited theme park in North America and averages approximately 4 million visitors per year. The park features 40 rides including roller coasters, family rides, dark rides and water rides.

The theme park began in the 1920s as a road-side berry stand run by Walter Knott along State Route 39 in California. In 1934, the Knotts began selling fried chicken dinners in a tea room on the property, later called "Mrs. Knott's Chicken Dinner Restaurant."

By the 1940s, several shops, and other attractions had been constructed on the property to entertain a growing number of visitors, including a replica ghost town.

The site continued its transformation into a modern amusement park over the next two decades, and an admission charge was added in 1968. In 1997 the park was sold to Cedar Fair for $300 million, just two years after the Knott's food business was acquired by Conagra, Inc. in 1995.

Jaimi McEntire
Loved it when I was a kid. Funny thing, everyone always said it like &quot;KnottsBerry&quot; Farm. When it&#39;s really Knott&#39;s &quot;Berry Farm&quot;. We didn&#39;t put it together when we were kids that it was an actual Berry Farm. 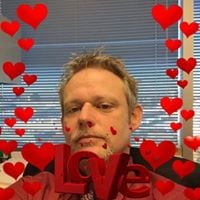 Marlene Gockley
The Knotts live in our community now. Retired in Oregon and go to our church.

whitewaterrapids
Also one in Florida.

janellejaworski
In just say you know my mom could be a real stickler about knott&#39;s berry farm

ninakamwene
Took my daughter there many times when she was young since we live in Los Angeles. Fun place for the kids. Now I know the history. Thank you and be well.

greengalx
Brought my kids there every year on Veteran&#39;s Day. It was free admittance for military, just had to pay for parking. We loved it!

Linda Will
There’s one in Florida too!

Char
Marlene Gockley, that&#39;s why I saw their place in Oregon Richard Adams
Loved it as a kid when it was free, until the hippies ruined it.

earlepg
Stopped by there a few times years ago. Really enjoyed the park and especially the restaurant.

Elsy O. Stromberg
tesla alset, Thanks, but I already knew that.

Bob Gorby
Their restaurant is under appreciated
Author:
ALPHA
Writer