Which famous US monument is hidden in the picture?

The Washington Monument is an obelisk on the National Mall in Washington, D.C., built to commemorate George Washington, once commander-in-chief of the Continental Army and the first President of the United States. 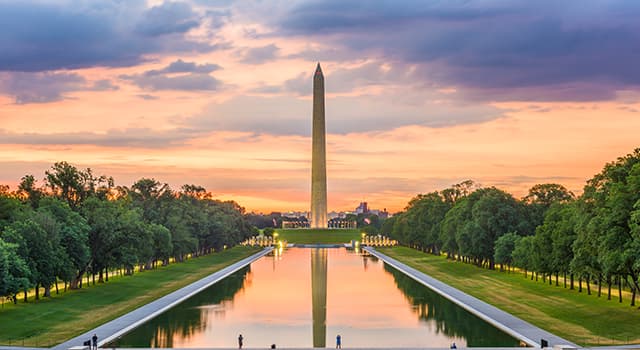 Located almost due east of the Reflecting Pool and the Lincoln Memorial, the monument, made of marble, granite, and bluestone gneiss, is both the world's tallest predominantly stone structure and the world's tallest obelisk, standing 554 feet 7 11⁄32 inches (169.046 m) tall according to the National Geodetic Survey.

Construction of the monument began in 1848 and was halted from 1854 to 1877 due to a lack of funds, a struggle for control over the Washington National Monument Society, and the intervention of the American Civil War. Although the stone structure was completed in 1884, internal ironwork, the knoll, and other finishing touches were not completed until 1888. A difference in shading of the marble, visible approximately 150 feet (46 m) or 27% up, shows where construction was halted and later resumed with marble from a different source.

The original design was by Robert Mills, but he did not include his proposed colonnade due to a lack of funds, proceeding only with a bare obelisk. The cornerstone was laid on July 4, 1848; the first stone was laid atop the unfinished stump on August 7, 1880; the capstone was set on December 6, 1884; the completed monument was dedicated on February 21, 1885; and officially opened October 9, 1888.

filmnut
I was born on July 10, 1948, almost exactly 100 yrs to the day the corner stone was set in place for ‘The Monument’. In 1955 my Father &amp; Mother, along with my two younger brothers visited Washington DC. We visited all the monuments and memorials over a three day period. My Father a member of the Strategic Air Command was being transferred to a brand new SAC Air Force Base at Portsmouth, NH. Pease AFB. We were traveling from March AFB, that was located in Riverside, CA. We took leisurely 30 day trip across the USA. We literally followed the intier length of ‘Route 66’ It was a memorable trip to say the least.

homeducater
I&#39;ve waded in that reflecting pool. I think it was illegal.

Kennedy Whitney
It&#39;s the tallest structure in Washington DC hence no skyscrapers are allowed in DC

smilikat
2 friends and I took the stairs to the top...1969ish. Being asthmatic, I was quite proud 🇺🇸

sutter
I would love to vist

Cheryl McMeekin
Would love to go to Washington D.C. to see all the monuments.

Cheryl McMeekin
Would love to go and see the different monuments in Washington D.C.

galambos
In the old days you could climb up the monument. Took our 3 boys and did that. Very interesting. There are stones with various states names carved in them in the stairwell. We walked back down also rather than the elevator.

Joanne Serin
Dumb, as the monument was covered.

littledick
dsneed, Me either. But if it&#39;s supposed to be a phallic representation, then it must be uncircumcised. And I guess that would be fairly accurate, since George was not Jewish.

littledick
Did anyone get this wrong? Did not have to guess.

Donna Joy McLean Cleveland
filmnut, sounds like it was a wonderful trip -- especially at thst time iin history. I was born. In Washinton DC in 1955. A more innocent time. Now is ok too, in many ways, though.

dsneed
Until seeing this particular photo I never interpreted this structure as a phallic representation. Hey, I didn&#39;t build the thing nor did I photograph it nor do I have a dirty mind. Yay me.
Author:
David Wilkes
Writer