Which of the planets listed below is called an Ice Giant?

The first four planets (Mercury, Venus, Earth and Mars) are called the Terrestrial Planets. A terrestrial planet or rocky planet is a planet that is composed of primarily silicate rocks or metals.

The next two planets (Jupiter and Saturn) are called the Gas Giants. This is due the their composition of Hydrogen and Helium. They are very large but much less dense than the earth.

The last two planets (Uranus and Neptune) are called the Ice Giants because of the extremely cold temperatures on these planets. This is due to the great distance they are from the sun.

Angel Attanasio
What was poor Pluto??? I feel so bad we kicked him out of our solar system!!!! He was a planet all my life!!!!

Todd Van Dell
Angel Attanasio, Mine too. But, they downgraded Pluto from planet status to dwarf planet. Another dwarf planet Eris was discovered in the Kuiper belt beyond Neptune and because Eris and Pluto are roughly the same size, Pluto was reclassified as a dwarf planet. Here is an explanation from Wikipedia&#39;s entry regarding Pluto: &quot;Pluto was discovered by Clyde Tombaugh in 1930 and was originally considered to be the ninth planet from the Sun. After 1992, its status as a planet was questioned following the discovery of several objects of similar size in the Kuiper belt. In 2005, Eris, a dwarf planet in the scattered disc which is 27% more massive than Pluto, was discovered. This led the International Astronomical Union (IAU) to define the term &quot;planet&quot; formally in 2006, during their 26th General Assembly. That definition excluded Pluto and reclassified it as a dwarf planet. Pluto is the largest and second-most-massive (after Eris) known dwarf planet in the Solar System, and the ninth-largest and tenth-most-massive known object directly orbiting the Sun. It is the largest known trans-Neptunian object by volume but is less massive than Eris. Like other Kuiper belt objects, Pluto is primarily made of ice and rock and is relatively small—about one-sixth the mass of the Moon and one-third its volume. It has a moderately eccentric and inclined orbit during which it ranges from 30 to 49 astronomical units or AU (4.4–7.4 billion km) from the Sun. This means that Pluto periodically comes closer to the Sun than Neptune, but a stable orbital resonance with Neptune prevents them from colliding. Light from the Sun takes about 5.5 hours to reach Pluto at its average distance (39.5 AU).&quot; For the record, the distance of Earth to the sun is 93,000,000 miles, or, 1 Astronomical Unit. Also, Pluto has still not completed one revolution around the sun, as one revolution is equivalent to 247.68 earth years. Rebecca Neese
Mark, true. But the question asked which of the four planets listed as possible answers is an ice giant, and only Neptune was part of the selection. 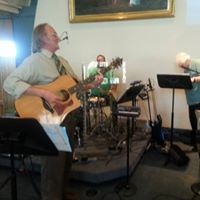 wordster
Angel Attanasio, Pluto was not kicked out, he (she?) was simply demoted. You&#39;d think astronomers would have more respect for Mickey&#39;s dog, but hey... Anne Roberts
I thought Neptune would be full of water which might then freeze so be cold cold cold ,,,,,

Carroll Price
Since cold is nothing more than the absense of heat in varying amounts, there&#39;s no such thing as cold itself. Michael D Smith
I liked Pluto. Even though it was a Mickey Mouse planet.
Author:
Jim Moser
Writer