Which US landmark is hidden in the picture? 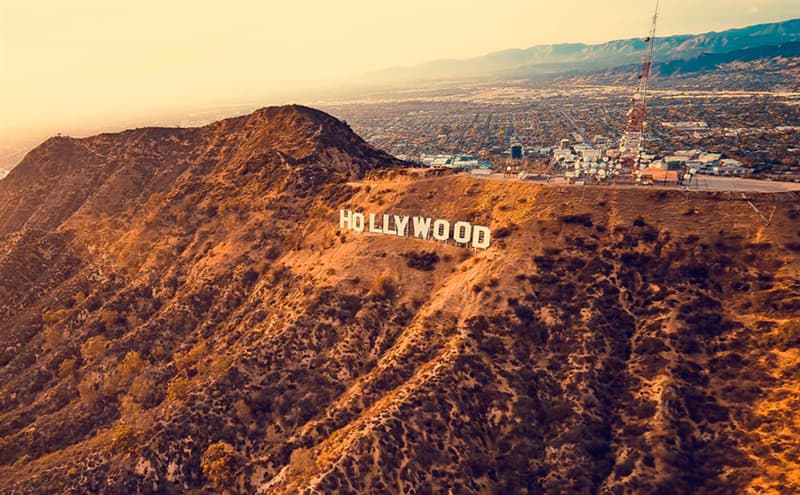 It is situated on Mount Lee, in the Hollywood Hills area of the Santa Monica Mountains.

"HOLLYWOOD" is spelled out in 45-foot (13.7 m)-tall white capital letters and is 350 feet (106.7 m) long. The sign was originally created in 1923 as an advertisement for a local real estate development, but due to increasing recognition, the sign was left up. The sign has been a frequent target of pranks and vandalism across the decades, but it has since undergone restoration, including the installation of a security system to deter vandalism.

The sign makes frequent appearances in popular culture, particularly in establishing shots for films and television programs set in or around Hollywood. Signs of similar style, but spelling different words, are frequently seen as parodies. The Hollywood Chamber of Commerce holds trademark rights to the Hollywood Sign. Les Griffin
Original had land in the end, if I&#39;m not mistaken, it blew down or was it an earthquake wrecked it?...

james parrillo
I have never seen the sign from that angle. I did not know what was behind the Hollywood Hill visually, or Mount Rushmore, for that matter. I thought the area looked populated and the hill wooded, not a mountain cliff, as in South Dakota. I would love to read any corrections on that but have not determined how to do it. Thank you, Christine, James&#39; wife

Char
Nailed that one after deduction all that was left

Howard Groopman
I got fairly close to it when visiting 4 years ago. larrywagner
Easy one, about as easy as some people pressing the thumbs down on others comments.

hector tubens
Grant McIntosh, there is no end to David Wilkes madness!!! 🤯

Irma Rivera
I lived long enough in California to have recognized the picture!!!

Richard G Schwartz
It was 1st known as Hollywoodland.