Which US president was once a peanut farmer?

This man's story is quite inspiring, even though he wasn't just an ordinary farmer. We could all learn from his example.

His name is Jimmy Carter and he was the 39th President of the United States. But before the presidency he was... a peanut farmer. His family owned a peanut farm outside the small town of Plains.

In 1976 the United States had been reeling from the resignation of President Richard Nixon when the former peanut farmer, promoting himself as a government outsider, was elected president. Today Carter is a member of The Elders - an international non-governmental organisation of public figures, peace activists, and human rights advocates.

Note from history: Carter has always searched for peaceful solutions to international conflicts. He was eager to advance democracy and human rights, and to promote economic and social development. For his high-pitched ideas he was awarded the 2002 Nobel Peace Prize.

William Laughlin
Rodney Harvey You dont give him his just deserts. Carter brought Israel and Egypt together with the Camp David Accords. During his administration there was not a single shot fired or bomb dropped against an enemy. He was also responsible for the release of the Iran hostages. The deal was completed and papers signed before he left office. They were released after Reagan took office because of political gamesmanship, but Saint Ronnie had nothing to do with the release. The decline of the middle class you speak of began with the Reagan administration with his deregulation of big business and banking, tax breaks for the wealthy, and his laughable idea of &quot;trickle down economics&quot;! It is always the conservatives who are less fiscally responsible, although they&#39;d like you to believe it&#39;s the liberals. Bush, the worse president weve ever had, took a surplus left by Clinton, down to the largest deficit we&#39;ve ever had by starting 2 unjustified wars, at the same time cutting taxes for the rich, leaving us with no way to fund the wars. Obama has reduced that deficit by more than 2/3! 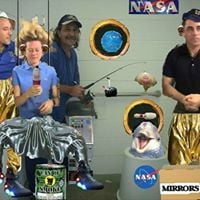 Mark Johnson
Not like somebody, who thinks he could walk straight into the White House without knowing anything about government. Somehow he finds these voters who thinks like him. LMAO!

unkabob
William Laughlin ... Thanks William.. Carter also tried to initiate solar power as a serious project but Raygun squashed that attempt when he eked into the white house.. Imagine where we would be today with alternate power sources had Raygun not decided to delay free energy for twenty years because he thought that he knew better (or was it to protect his contributors iinterests?).

William Laughlin
Jmz N Nesky You are absolutely right! In fact, Carter had installed solar panels on the White House and Reagan had them removed when he moved in! I guess he didn&#39;t want to rattle his cronies in the oil and coal industries. Just like the fuel he used, Reagan was a dinosaur. Kenneth Dobson
He was not inexperienced in government. He was one of many who became President after serving as governor of a state. Carter was governor of Georgia. Jerehmy White
And Carter was the weakest and worst president this country has seen in the last 140 years. Until 2008, that is.

Janice Lea Vanlandingham
williamrlaughlin, so when are you going to run for President since you know so much more than those who have walked that mile. It is easy to criticize from the bench.

deniseraz
President Carter is one of the most underrated man to hold the office of the Presidency. Trump will go down as the WORST in our history.

Sandra
I know a lot of people criticize him but I thought he was and I have bad president and did I don&#39;t think people knew at the time that in the depression his family would help out lots of people Patty Atwan
He was a good President. Obama the worse one.

jean k hart
Rodney Harvey, why are you so angry?

sellingthemountains
Just that last statement shows you know absolutely nothing. Obama reduced the deficit by 2/3??????

sellingthemountains
If you lived in So Florida during his term you would detest this man. So nice...he got Castro to allow some folks to emigrate to the US to join their families ❤️ Sweet huh? The dumb bamboozled Carter received the dregs of the earth. Actually the citizens of Florida were the recipients. Castro sent from his prisons and mental hospitals. After that crime was rampant and So Fla became a terrible place to live. Thanks Carter!

billyray
Would that be GE ?

billysmom
William Laughlin, Clinton only had a surplus because he shortchanged the entire military. I know because we were in the military at that time. There were NO cost of living wages, no re-up bonus&#39;, and our housing allowances were nil. It was very hard during those years for the military. Also hard with Obama, who cared more about kissing up to the enemy than he did our own country and it&#39;s LEGAL citizens.

sheloba
I used to live near their farm.That was an awesome time..I just love the whole family very kind and generous.

restwjq
For God&#39;s sake do not forget tat he was assaulted by rabid rabbits in his stock pond!

yadavis
President Carter is one of my favorite presidents. Patricia Maden
And he was Governor of Georgia before he ran for POTUS.

johnmatthew
williamrlaughlin, Except I would argue Trump is the worst we&#39;ve ever had. I wish we had George Bush president again, compared to this. I love Pres Carter ❤️
Author:
Stevie G
Writer