Who appears when Aladdin rubs the lamp?

"Aladdin" is a 1992 American animated comedy musical romantic fantasy adventure film produced by Walt Disney Feature Animation for Walt Disney Pictures. The film follows Aladdin, a street urchin, who finds a magic lamp containing a genie. In order to hide the lamp from the Grand vizier, he disguises himself as a wealthy prince, and tries to impress the Sultan and his daughter.

The Genie first appears in "Aladdin", where he is released from a magical oil lamp by the titular character in the collapsed Cave of Wonders. After he explains that he can grant three wishes, Aladdin, knowing that Genie would only grant his wish to get out of the cave if he used one of his wishes, dupes him into freeing Aladdin and Abu the monkey from the cave without using a wish. At a faraway oasis, the Genie is shocked when he finds that Aladdin didn't use his first wish to get out of the cave and reluctantly agrees to let Aladdin's first wish to be spared. 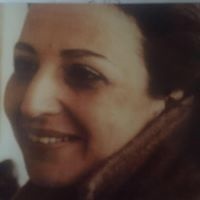 Olga Mattar
Aladdin is a tale that appears in the Thousand and one Nights and is told to all Middle Eastern children. It is the origin of the Disney film. Just correcting information. Sandy Roberts-Anderson
Another question with a wrong answer. Aladdin wasn’t invented by Disney. It’s an ancient tale. Someone really should be editing these question/answer sets. The entire point of the exercise is to offer interesting facts, isn’t it? When so many of the answers are incorrect the game becomes less interesting.

omar
I think that you people need to go back and read the story again. It says Diney produced the animated story. There is a distinct difference between creating and producing. You may want to break out your dictionary in the future.

Playerkim
Got to rub your own bottle

carriethomas
Darn it ! I was thinking of something else

Walter
Gees a 5 yo could pass this.

martflorinda
This keeps my mind alert and ITS fun

Mskathy
Olga Mattar, Thank you. I was going to say the same. Like thousands of us, I heard and read the original tale long before Disney made the animated movie.

danicadale
This was the easiest test ever. I got 100% All the questions are common sense questions.

renholl
omar, thank you! I agree and she will see by my post .... Plus I still wish I could find that lamp I would be a very happy girl 😂😂
Author:
Adam Scott
Writer