Who is the voice of the character Bart Simpson?

Nancy Jean Cartwright (born October 25, 1957) is an American voice actress, film and television actress, and comedian. She is known for her long-running role as Bart Simpson on the animated television series The Simpsons. Cartwright also voices other characters for the show, including Nelson Muntz, Ralph Wiggum, Todd Flanders, Kearney, and Database.

After continuing to search for acting work, in 1987 Cartwright auditioned for a role in a series of animated shorts about a dysfunctional family that was to appear on The Tracey Ullman Show. Cartwright intended to audition for the role of Lisa Simpson, the middle child; when she arrived at the audition, she found the role of Bart—Lisa's brother—to be more interesting. Matt Groening, the series' creator, allowed her to audition for Bart and offered her the role on the spot. She voiced Bart for three seasons on The Tracey Ullman Show, and in 1989, the shorts were spun off into a half-hour show called The Simpsons. For her subsequent work as Bart, Cartwright received a Primetime Emmy Award for Outstanding Voice-Over Performance in 1992 and an Annie Award for Best Voice.

Carol Focht Cheney
Nancy Cartwright is the voice of Bart Simpson. Angela Cartwright was on Lost in Space, and Make Room For Daddy and was Brigitta in The Sound Of Music. As far as I know they are not related. Oh and Angela&#39;s older sister is Veronica Cartwright who appeared in Alfred Hitchcock&#39;s The Birds. 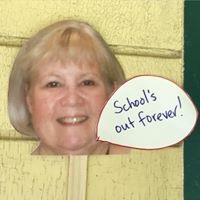 Sue Simon
Carol Focht Cheney, Tight you are, on all counts!

allen s dohner
Lynne Zeman, that was Julie Kavner who is the voice of Marge Simpson.

nmcgirt
Don&#39;t have a cow man ! I got this one right ..Love the Simpsons

Don Racette
Carol Focht Cheney Your husband told me the way you make his dinner is for the birds. Jill Pearson
Friends, please can we just allow each other to make their comments and move on? If someone saying, &quot;I got it!&quot; or relating an anecdote about the answer makes you &quot;have a cow,&quot; I&#39;d hate to see what happens to you when something REALLY bad occurs in your life. It&#39;s just a game. Enjoy it! &#128526;

Kitty White
Lynne Zeman, the sister of Rhoda was played by Julie Kavner. The mother was Na by Walker.

Lynne Zeman
Prior, she was the younger sister to &quot;Rhoda &quot;- sitcom spin off from Mary Tyler Moore.
Author:
Baron Byron Greenback
Writer