Lombard, born in a wealthy family in Indiana, was raised by her mother in Los Angeles. She made her first appearance on the screen at the age of 12 in A Perfect Crime (1921). At 16 years old, Lombard signed her first contract with the Fox Film Corporation to play bit parts, but later Fox dropped Lombard because of the scar left on her face after a car accident.

Nevertheless, Lombard continued her career and signed a contract with Paramount Pictures to become a popular and recognized comedy actress. Sarah Fullerton
Sad to die so young. She was also married to Clark Gable (Rhett Butler).

filmnut
There is a &quot;Hollywood Legend&quot; that Clark Gable was so heartbroken that he joined the USAAC. His attitude was &quot; I have nothing to live for &quot; This is too long a story to go into, but if your interested there&#39;s plenty written about it. Kathy Shever
Carole Lombard died in a tragic air crash flying between USO performances. She was only 33. 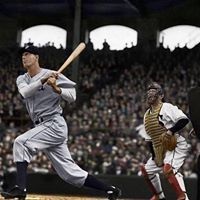 Bob Canter
You left out the most interesting facts of her life! Carole Lombard was killed in an airplane crash outside of Las Vegas, NV, on January 16, 1942. Everyone on that plane was killed, including her mother, who was traveling the country with her. Lombard was married to Clark Gable and from all accounts there were very happily married in spite of the inability to have children. Gable was distraught after Lombard&#39;s death and shortly afterwards enlisted in the Army Air Corps and saw action in Europe. Some say that Gable secretly wanted to die in combat. He survived the war and lived for another 15 years. It took Marilyn Monroe to kill Gable in their last film, &quot;The Misfits,&quot;, in 1960. Larry Humphrey
Thanks to ALL of you - was just going to ask how she died so young.

kymberlykphillips
She was gorgeous and a awesome actress.very sad she passed away so young.

jack patti go
Got it correct?

hodoushere
A gem in many ways, thanx.

andimike
Clark was ill after her death.luckily he had others to help cheer him up!

lorriefiel
Abynum, Carole Lombard did not die in a car accident. She died in a plane crash while on a USO tour during WWII. She was married to Clatk Gable at the time. He then joined the Army Air Corps and became a combat pilot.

Helen Christopulos LoBosco
Got it. Yes to below comments.

allen s dohner
Indeed, Clark Gable was so distraught by his wife Miss Lombard&#39;s death he enlisted in the USAAC (the forerunner of the USAF) as a buck private and quickly advanced through the ranks.

Maho girl
Richard S. Levine, I think she only hates them when she gets a question wrong

patrhea
Always liked her. A beautiful lady even with a scar.

Richard S. Levine
Janice Fish, Don&#39;t you hate or are jealous of Celebrities?

dvdeaton
Tough question, but I knew Carole Lombard wore blonde hair.. There was a film that came out in late 1970s, &quot;Gable and Lombard;&quot; didn&#39;t see it or know how it fared at box office..