Who narrated The Twilight Zone?

In 1959, this classic series premiered on CBS. Serling was not only the narrator; but, he was also the creator of the show. Originally, Serling wanted Orson Welles to be the narrator, but the show could not meet his salary demands. Serling contributed 73% of the scripts in the first two seasons of the show. The show ran for five years and 156 episodes; it was cancelled in 1964.

mafiacook
He didn&#39;t just narrate, he created, produced and wrote. Nobody has a voice like him. He was a genius!

steve
A fantastic show, and an extremely talented man. Rod Serling was a genius, but many other scripts were written by some well-established and equally talented writers (e.g., Richard Matheson, Earl Hamner, Jr., George Clayton Johnson, and Charles Beaumont). And, FOUR Star Trek regulars were in Twilight Zone episodes; James Doohan (Scotty) was in &quot;Valley of the Shadow.&quot; Arthur Wesselman
Ellen Wolf, it was neither. It was genuinely scary and thrilling, engaging the mind and the imagination. No other TV show got even close to the terror it produced. &quot;Presented for your consideration...&quot;

balegal debby
Didn&#39;t Leonard Nimoy also star in a reboot which redid the skit he was in originally, but he played a different character

Helen LoBosco
Yes. I got it. My brother, an adult, was babysitting for our sister in California. There were movements and his chair moved while he was watching eerly Twilight. Funny. Cailiforia get little quakes. I was having a drink one early evening. I thought I couldn&#39;t be that drunk. I just started the beer. :-) California stories. Todd Van Dell
There have been more than a few attempts to revive Twilight Zone as a television series. Most seem to not last very long. I can&#39;t say I know why they don&#39;t last, but I wonder if the newer versions fail to put in a moral to the stories, as all Rod Serling&#39;s episodes had at the end. Some lesson to be learned along the way. I believe both the novelist and short story writer Richard Matheson, and novelist and short story writer Ray Bradbury, wrote episodes of the original Twilight Zone.

Ellen Wolf
Great show!! Serling was so funny introducing the stories, what with his serious scowl. And the music! Ding ding ding ding... LOL. Never could decide whether the show was more creepy or more hilarious.

dlh
I miss those years of television. Great shows. 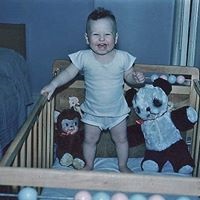