Who painted this famous painting?

This famous painting is called "The Blue Boy". It was painted by Sir Thomas Gainsborough. It is now located in the Huntington Library, San Marino, California.

It is a historical costume study as well as a portrait. The youth in his 17th-century apparel is regarded as Gainsborough's homage to Anthony van Dyck, and in particular is very close to Van Dyck's portrait of Charles II as a boy.

This very painting is a great representation of Thomas Gainsborough's style: all his works were painted in light colors and with easy strokes. The unique play of shadow and light is also present. He was also a talented landscape painter, that's why the artist paid a lot of attention to the backgrounds of his portraits, as we can see in this picture.

dickahern
As a boy I saw it at the Chicago Museum of Art in the early 1950&#39;s. The illustration does not do it justice. When viewed at an angle from the boys left hand side it acquires a perception of depth and a presence. that isn&#39;t readilly observable from a front-on view. I had just glanced at it on my way by when a school tearche&#39;rish looking woman commented on having the best view in the hall. She was right. Gayle Evans
This is one of my favorites because I lived in Gainsborough&#39; s home town of Sudbury, Suffolk, England, visiting his own house which is a museum now. The Blue Boy is not typical; landscapes were his favorite because of his love of nature around the Stour River. One can see this in his style, promoting the chiaroscuro &amp; linear perspective of landscapes.

Vince Savage
Steve Walker, trick question ? how do you come to that conclusion ?...you are either aware of great works of art or you are not....clearly, you are of the latter persuasion, looking for an excuse to display ignorance of the subject.

Howard Groopman
I think the companion painting of a girl (&quot;Pinky&quot;) is in that museum too.

larrywagner
tesla alset, Good job Tesla, I got your back.

robert karel
Who is the painting of?

Joanne Serin
I saw it in the Huntington Library when I was in high school. Sue Gembrini-Spataro
Saw it at the Huntington Library, along with a Pinky, when I was a child.

Fred Keogh
I see Daniel Bosch is being his insular self! If it&#39;s not American, who cares! Ignoramus. 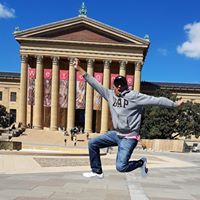 Ketan Patel
Thought it could be Van Dyck as I had seen a similar style painting in The Antique Roadshow but went 50/50 and Van Dyck was gone. So picked the right answer by guessing. Patsy Burchell
Being an amateur artist I should have known the painter,knew the painting was called the blue boy soon as I saw it,got it wrong Maho girl
Daniel Bosch, why don&#39;t you do everyone a favor and take your crass ignorance to some other site Cherie Hunt
I understand how the confusion comes in with regard to Thomas Lawrence. He painted &quot;Pinkie,&quot; which is frequently shown together with &quot;Blue Boy.&quot;