Brian Reynolds
I remember my father used to make homemade ginger beer. It was delicious 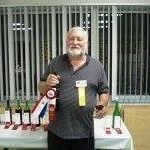 Carroll Price
The ginger would be primarily for flavor while the raisins (dried grapes) provide sugar needed for yeast to convert to alcohol, which I assume is relatively low, leading to fortifying the wine which consist of adding additional alcohol.
Author:
Special Patrol Group
Writer