WD-40 was developed in 1953 by Norman Larsen, founder of the Rocket Chemical Company, in San Diego, California. Having become available to consumers in 1958, it is still popular and widely used worldwide. The spray was originally designed for Convair to protect the outer skin of the Atlas Missile from rust and corrosion. Later the spray turned out to be very useful in household, which made it popular at the market.

The name of the spray is abbreviated from 'Water Displacement, 40th formula', which means the formula was perfected only on Larsen's 40th try.

Spencer Young
I just &quot;squeaked&quot; by with the right answer. Paul Desmet
Great for killing ants too. Also one of the few companies on the stock exchange making only one product.

dianeschlehuber
It&#39;s also great for getting crayon off painted walls.

alan
No idea. We have something called Q60 which seems to do the same in a South Africa

Iancompat
It was also developed as a glue residue cleaner, try it! If you&#39;ve got an old enough tin it says so on the side!

earlepg
Wanda Pelchat, I did too. Just don&#39;t know where.

carlthedad
Learned this in power mechanics class in 1976 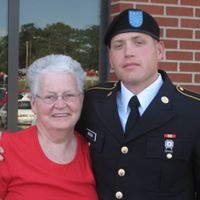