What is the name of the main protagonist of the "Back to the Future" trilogy?

The Back to the Future franchise is an American science fiction–adventure comedy film series written and directed by Robert Zemeckis, produced by Bob Gale and Neil Canton for Steven Spielberg's Amblin Entertainment, and distributed by Universal Pictures. The franchise follows the adventures of a high school student, Marty McFly (Michael J. Fox), and an eccentric scientist, Dr. Emmett L. Brown (Christopher Lloyd), as they use a DeLorean time machine to time travel to different periods in the history of Hill Valley, California.

Martin Seamus McFly is portrayed by actor Michael J. Fox. McFly also appears in the animated series, where he was voiced by David Kaufman. Marty is a friendly, easygoing but accident-prone everyman who can sometimes lack critical thinking skills; he is nevertheless brave in the face of danger and can be very quick-witted and intelligent. He has shown some good and basic street fighting skills and often throws punches in hand-to-hand confrontations. He is loyal to his family and friends, regardless of whether or not he is estranged from them.

His major character flaw is his pride, which causes him to take unnecessary risks to show others that he is not a coward. However, during a visit in 1885, when his ancestor Seamus McFly mentions that his brother Martin was killed in an argument after someone questioned his bravery, Marty begins to re-think his stance on what other people think of him.

billyboy915
Alan Waites, You are confusing protagonist with antagonist.

Linda Spreng
What a fun series of movies!

Susan Lake-Harris
Loved the first movie the most.

Jim Mascair
If they had used a faster car, Brown wouldn&#39;t have needed a flux capacitor. I still wish I owned a Delorean. 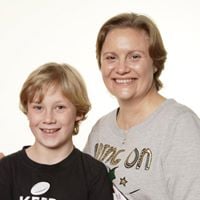 Cath Arnold
Alan Waites, That&#39;s what I thought too. Learn something new everyday. Thanks Marjorie, Chrissy, Julie and billyboy. ;)

SeasonedAngel
An ex boyfriend is a huge fan of Christoper Lloyd. When we went to see this movie, he was very thrilled that Christoper Lloyd&#39;s character had same name as him. ;-)