The Great Pyrenees, known as the Pyrenean Mountain Dog outside of North America, is a large breed of dog used as a livestock guardian dog. It should not be confused with the Pyrenean Mastiff.

As late as 1874 the breed was not completely standardized in appearance, with two major subtypes recorded, the Western and the Eastern.

According to the Great Pyrenees Club of America, the Great Pyrenees can be naturally aggressive with any predators that may harm its flock. However, the breed can typically be trusted with small, young and helpless animals of any kind due to its natural guardian instinct.

In nature, the Great Pyrenees is confident, gentle and affectionate. While territorial and protective of its flock or family when necessary, its general demeanor is of composure and patience and loyalty.

It is a strong-willed, independent and reserved breed. It is also attentive, quite fearless and loyal to its duties. The Great Pyrenees' size makes it an imposing guardian. A dog of this breed will patrol its perimeter and may wander away if left off its leash in an unenclosed space.

The Great Pyrenees protects its flock by barking and, being nocturnal, tends to bark at night unless trained against such behavior.

Sally Downie
Love the Dog questions, But to those of you who don&#39;t, either Replace the Question of Just Don&#39;t Answer them!! Arno Janssen
Have 2 of them!!!

Richard G Schwartz
Looks like a good dog to have around.

Spencer Thomas Hancock III
One of my daughter has one of these and she is huge and lovable, thinks she is a lap dog. She does slobber a bit.

Helen Dakin
Sally Downie, I like the dog questions too, but I don&#39;t have the option of replace question. I&#39;m in Australia. I wonder if that makes a difference.

Char
spower, then change your question as many of us do.

earlepg
Handsome dog but too big for our apartment (also no yard). Lib Petrov
First dog question I did not answer correctly.

spower
Please, NO MORE DOG QUESTIIONS! I like dogs, but all of these breed questions are nothing but tedious. I have not, and never will, watch the Thanksgiving Day dog show. 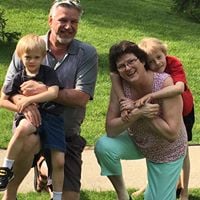 Michael J. Fahey
breed was on the sign behind

karen twirly
Kent, yes, eventually. But these have been AKC breeds. Next will be UKC, so it might take a while.

Jennifer Dyster
They would be good with pasture hens then

Paul Backus
We have one. She is 10 months old at 80 pounds. Love chewing up stuff and BARKING!!
Author:
ALPHA
Writer