Which 'ice hockey' is played without a goal-keeper?

An 'unicycle' is a vehicle that touches the ground with only one wheel. It has been used to create new sports like 'unicycle hockey'. The 'unicycle hockey' is a team sports, similar to rink hockey where players try to hit with their sticks into other teams goal, except that each player must be mounted on a unicycle. In 'unicycle hockey', a team is composed of five players (plus substitutes), but there is no dedicated goal-keeper role.

The highest governing body for this game is the International Unicycling Federation. The most recent set of rules for 'unicycle hockey' was published in 2015. The court used is between 35 and 45 metres in length, and 20 and 25 metres in wide, while a hockey-stick's design is legal by the Ice hockey. The 'unicycle' can have a maximum wheel diameter of 24 inches (61cms) and a tennis ball is used.

There are three national 'unicycle hockey' leagues viz., Australia, with 8 teams in 2016; Germany, with 89 teams; Switzerland, with approximately 20 teams. In addition, there are clubs and teams in other countries, including England, France, Denmark, Sweden, Hongkong, Singapore, Taiwan and Korea.

Richard D. Boyle
If it’s not played on ice, it’s not ice hockey. 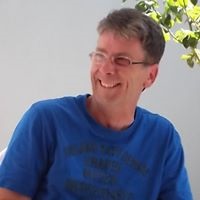 Tom Zwartkruis
How can a unicycle play on ice? Indeed a very poorly phased question. Editors, what are you doing?

Mark Gavin
The International Unicycling Federation? Boy, I bet their meetings are a laugh!

Denise Currie
Is it played on a unicycle on Ice???