Which of the following is extracted from wetlands?

Peat, sometimes known as turf, is an accumulation of partially decayed vegetation or organic matter.

Peat is not a renewable source of energy. It forms when plant material does not fully decay in acidic and anaerobic conditions. It is composed mainly of wetland vegetation: principally bog plants including mosses, sedges, and shrubs. As it accumulates, the peat holds water. This slowly creates wetter conditions that allow the area of wetland to expand.

Most modern peat bogs formed 12,000 years ago in high latitudes after the glaciers retreated at the end of the last ice age. Peat usually accumulates slowly at the rate of about a millimetre per year.

Traditionally peat is cut by hand and left to dry in the sun. But for industrial uses, companies may use pressure to extract water from the peat, which is soft and easily compressed, and once dry can be used as fuel. In many countries, including Ireland and Scotland, peat was traditionally stacked to dry in rural areas and used for cooking and domestic heating.

Peat can be a major fire hazard and is not extinguished by light rain. Peat fires may burn for great lengths of time, or smoulder underground and reignite after winter if an oxygen source is present. 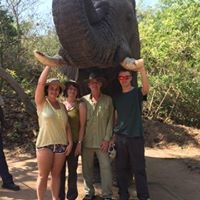 Myles Evans
Peatlands are one of the best carbon sinks, absorbing far more CO2 than forests. Burning peat is an environmental disaster!

Trudy Gourlay
I come from Caithness in Scotland, this is the largest area of peat in Scotland. The smell of peat burning in a fire is amazing.

smwhalen
Thank you, Lilly. Hang in there. Your question was good. Ignore the &quot;haters&quot;.

Joe Mangan
cjsrobertson, you can also get a whiff of it from Scotch whisky, as it is used to fire the distilling process.

Char
lls, possibly yet they were lining it up for the answer peat.

Char
The question was on peat not in bodies found or minerals and such..you all need to get a life besides being nasty to out Fantastic authors who take their time just for us out of their day.

Char
Denise Currie, mine was

lls
I think the &quot;iron ranges&quot; in America and Canada, alone, benefitted from &quot;wetlands wastes,&quot; acc. to some of my sedimentary books....