Which scientist was a host and a co-writer of the 1980 TV series "Cosmos: A Personal Voyage"?

Carl Sagan November 9, 1934 – December 20, 1996) was an American astronomer, cosmologist, astrophysicist, astrobiologist, author, science popularizer, and science communicator in astronomy and other natural sciences. He is best known for his work as a science popularizer and communicator. He narrated and co-wrote the award-winning 1980 television series "Cosmos: A Personal Voyage". The most widely watched series in the history of American public television, "Cosmos" has been seen by at least 500 million people across 60 different countries.

Each of the 13 episodes was created to focus on a particular subject or person, thereby demonstrating the synergy of the universe. They covered a wide range of scientific subjects including the origin of life and a perspective of humans' place on Earth.

dvdeaton
Should have, could have gone with Sagan but didn&#39;t..

Cherie Hunt
I can still hear him saying the word &quot;cosmos&quot;.

dlh
Never knew much about science😯

lls
Groundbreaking series!! &quot;Uncle Carl&quot; was a favorite around our house!

Jas Newman
Kathleen Kennedy, Nye is not a scientist.

Lydia Wood
I remember Bill Nye when he was on a weekly variety show in Seattle. Certainly not in the same league with Carl Sagan!

Cheryl McMeekin
Had no idea, son helped me answer it correctly.,.

kite005
Great show. His way of presenting information and ideas was somewhat unique and understandable to with little knowledge of the subject. Like me as a kid 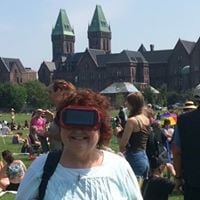