Who are these children's characters?

These are the four Teletubbies: Tinky Winky, Laa-Laa, Po and Dipsy (from left to right).

'Teletubbies' is a British children's television series that first aired from 1997-2001 and was later revived in 2015-present. The show's four main characters were the Teletubbies, so called because of the television screen in their stomachs and antennas on their heads. Designed to resemble toddlers, they are brightly multi-coloured and speak in gibberish.

The show's episode structure is very formulaic. Each episode the Teletubbies interact with the show's supporting characters, footage of live children is shown on their television screens and a magical event happens. At the end of each episode, the Teletubbies reluctantly say goodbye to the viewer as they go back to their home while the Sun Baby sets.

The Voice Trumpets (periscope-like speakers that rise from the ground) and Noo-noo (a mishap-prone anthropomorphic blue vacuum cleaner) were the original supporting characters but the revived series later added The Tubby Phone and the Tiddlytubbies (baby Teletubbies) to the roster.

'Teletubbies' was created by Anne Wood and Andrew Davenport for the BBC. As of 2019, 16 seasons have been produced. The show is a commercial and critical success (winning multiple BAFTA awards and being nominated for two Daytime Emmys), but has received some criticism for the educational value of the gibberish speak used by the Teletubbies as opposed to full sentences.

Chriss Crockford
Toya Wilcox voiced it. We used to have Bill &amp; Ben speaking gibberish didn’t do us any harm.

Jenny Devereaux
Pam Tyler, they are on CBeebies daily.

Pam Tyler
I don&#39;t agree with some of the comments! I always enjoyed watching them and now at the age of 88 would still watch them if they were on. 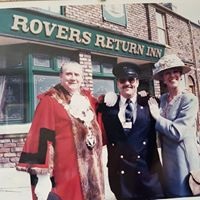 Robert Hampson
I note that nearly 100% get the answer right, so no matter how jibberish the audio it must have made some impact, sand to note it was for the very young using colour and sound to make them aware of sound and movement, not to teach speech.

Alan Straff
The questions of late have reached infantile levels and this is just another example of how low the bar is. Ian Sykes
Does not deserve comment....I must be on the wrong quiz
Author:
TWB
Writer