Catherine, Duchess of Cambridge, GCVO (born Catherine Elizabeth Middleton; 9 January 1982), is a member of the British royal family. Her husband, Prince William, Duke of Cambridge, is expected to become king of the United Kingdom and 15 other Commonwealth realms, making Catherine a likely future queen consort.

Catherine grew up in Chapel Row, a village near Newbury, Berkshire, England. She studied art history in Scotland at the University of St Andrews, where she met William in 2001. Their engagement was announced in November 2010. They married on 29 April 2011 at Westminster Abbey. The couple's children, Prince George, Princess Charlotte, and Prince Louis of Cambridge, are third, fourth, and fifth in the line of succession to the British throne, respectively.

jack patti go
Got it! She is a beautiful woman, inside and out!

Anita Clark Morton
Darlene Davidson, She COULD be Queen Kate, except it was stated a long time ago that she actually prefers &#39;Catherine&#39;. So I presume that when she becomes Queen Consort, she will be known as Queen Catherine B.C. MercerAuthor
That is no longer her name. She is the Duchess of Cambridge. Surely she is entitled to her title. After all, she is the wife of Prince William and has given an &quot;heir and two spares&quot; to the House of Windsor.

Val Tweedie
Catherine Duchess of Cambridge is her name

Kath Thomson
Why is she continually referred to as Kate Middleton? She is actually Kate Windsor now. 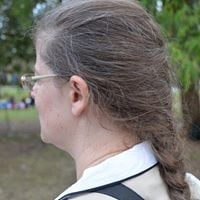 Fiona McWilliam
The answer should read: Catherine, the Duchess of Cambridge which is her correct title. She is no longer a Middleton. Alec McCracken
What about Prince Charles, he is due to become king on the death of his mother, then Prince William. Most would probably prefer William to become king when his grandmother dies, but I can&#39;t see it happening, unless Charles abdicates.

joycekingsmith
Johnny Rock, why do you say that? He will make it to the throne and he will be a good king.

joycekingsmith
Kath Thomson, then Meghan Markle is Meghan Windsor. Why do they only refer to their maiden name?

ajohnsongg
Mark Warren, your hanging is at Sun rise, lol

Bruce Means
Darlene Davidson, She will be Her Majesty,Queen Catherine. Not some ingnorant american abbreviation to suit their lack of propriety.

Char
Kath Thomson, exactly I know her as all the above and news articles actually list her that way.

Char
Pretty up in Diana&#39;s Boys and their wives and children.

ninakamwene
Got this beautiful lady.