What was originally used to make violin strings? 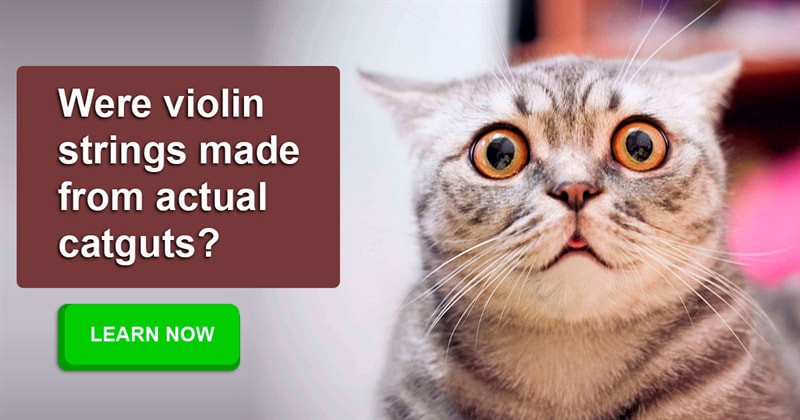 What do cats, tennis, doctors, cows, and violins have in common? The answer is… catgut!

Catgut sutures have been around a long time. Yes, that’s what’s used to make absorbable stitches, even today. Absorbable stitches are those that don’t need to be removed. They just kind of break down and become part of your skin. Making catgut is a pretty lucrative business, as there is still a fair demand. Where do they get all this catgut? Umm… you know when a vet puts your cat to sleep and then takes them into the back room? Well……

The truth is… if your cat is sitting with you as you read this, and is making a face like the cat above, you can tell your pussy not to worry; it isn’t, and never was, made from actual cat guts. Theoretically, you could use your cat’s intestines to make catgut string, but when compared to the string you get from cows and sheep, it’s not worth the trouble. A cow intestine can produce catgut string that is up to 160 feet long. Your cat’s intestine is small potatoes, compared to that. So, why the hell is it called catgut, when no cats were harmed in the production of this string? I’ll get to that in a bit. First, let’s find out exactly what this string is.

As I just said, it comes from the intestines of cows. Mostly cows, these days. Sometimes from sheep, pigs or even horses… but cow catgut is the biggest current industry. When cows are slaughtered for meat, the intestines are saved and processed. Here is a cross section of intestine: 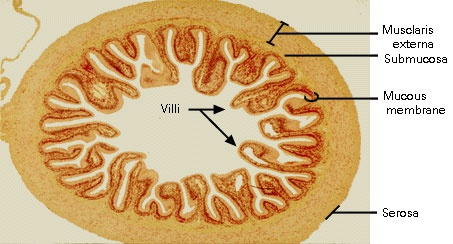 The part we want, to make catgut, comes mostly from the submucosa, and the externa layers. These two layers contain the collagen, which is what we’re looking for. Collagen is found throughout the bodies of mammals, and some other vertebrates. Wherever structural strength and elasticity is required in soft tissue, you may find collagen there. Skin, for instance; strong and elastic. The intestines also need to be strong and elastic, for when we eat a lot of food, in order for the intestines to stretch without bursting, and then to contract back to normal size after food passes. This collagen is made up of strong stretchy fibers.

At slaughter houses, the intestines are usually slit in half, thirds, or quarters, lengthwise. This would make different thicknesses, for different uses. So the above cross-section would make two, three, or four long lengths. These are then soaked in a series of solutions and caustic solvents, which dissolves away all the tissue except for the strong collagen fibers. Once all these fibers are clean and pure, it is then stretched, twisted, and allowed to dry under tension. What remains is catgut string; pound for pound, one of the strongest strings there is. In that regard, it’s stronger than a comparable weight of steel wire, in fact.

Various gauges (diameter) of catgut are produced, depending on what its ultimate use is to be. There are three main industries where catgut is used. The first is as surgical suture material. In western countries, it is being replaced by other materials that also are absorbed into the body. But the market is still strong in developing countries. So… you have the medical market.

Sports! Namely tennis and other racket sports, is also where you can find a use for catgut. For sporting purposes, it is made much thicker. Catgut was the original racket material. 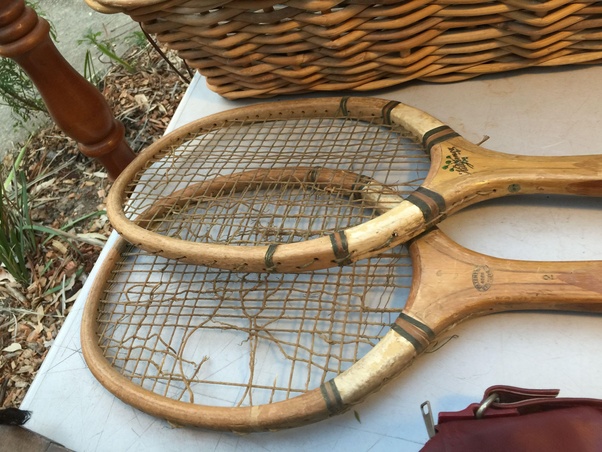 It is biological material, so in time, it does degrade. But it offered the perfect combination of strength and “spring”. Another sport that has used catgut is archery. Catgut has long been used to string bows, at least as far back as ancient Egyptian times. And as we know, the Egyptians really loved their cats. So clearly they didn’t use their intestines for their bows. No, it was cattle, even then.

And finally, the third major use of catgut is for violins.

Catgut was the original violin string material. These days, there are many other types of strings, but you can still find catgut in many professional orchestras, on a variety of stringed instruments, from classical guitars, to those giant pedal harps that rest against your shoulder and make Heaven sounds.

So there you go… now you know that, whether you have a large cut that has been stitched up… or you are playing tennis or practicing your archery… or even if you are playing your violin, viola, or harp…. no kitties were hurt.

You’re still wondering why it was ever called catgut, I’m sure. Well, the “gut” part is obvious… it’s made out of guts, which itself is a very old word. But the “cat” part actually started out as “kytte” (pronounced “kit”). What is a kytte? This is a kytte:

That’s the front and back of a kytte… a medieval-era mini-violin. It was so mini, that it was stored in the pokett ( [pokytte] 15th century), which was derived from the Old French poque, or bag. Traveling minstrels could whip out their kytte, play a lively tune or three, and then put their hardy instrument back into their pokett, without worrying about the delicate frailty of a normal sized violin. These instruments were the perfect mingling of a horsehair bow, rubbing against a cow gut catgut, in perfect concert with each other. Catgut (kytte gut) is so named because it is gut that is used to string your kytte. Simple as that. It has nothing to do with felines, whatsoever.

Did you believe that strings were made from actual cat guts? 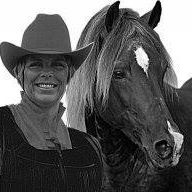 Barbara Weatherwax
This is a totally insulting article where the writer had no correct information. My father, was the major producer of &quot;catgut&quot; in the United States for more than 50 years. The raw material is Sheep intestines. Cats have nothing to do with it. It is infuriating to see the responses of folks who read this article and think they have been properly informed.

uragift
Interesting observations of about a commonly used material from natural sources. stellaclaude
robert karel, I wish you people would look things up before making a complete fool of yourself. Violin strings were NEVER made of goat hairs!

robert karel
Violin strings are made from goat hairs!

tbear
Knew that. Played violin for 10 years! Many, many years ago! Yousuf Mirza
Knew that catgut had nothing to do with cats but, cows. Kytte as the reason for the misnomer is new knowledge trivia for me!! James Klingenberg
Actually this is something I’m glad to have learned.

Chrissy Krainock Luders
I play the harp and gut strings are the best for tone. They aren’t the best on my pocketbook however, so nylon has taken over my harp.

Dan Drinkall
20 yrs of schooling and this is news to me ! Keep it up QuizClub !

Caroline Weis
Oh you have relieved my mind that kitty cats were killed for their guts. I knew that there was a use of what they called catgut for sutures as once when my father nearly cut his thumb off that the doctor used those absorbable strings on the inside to sew it back on.

Effie Salsman
I don&#39;t believe the not so nice language should be in this