Why are the keys on a QWERTY keyboard arranged in such a way? 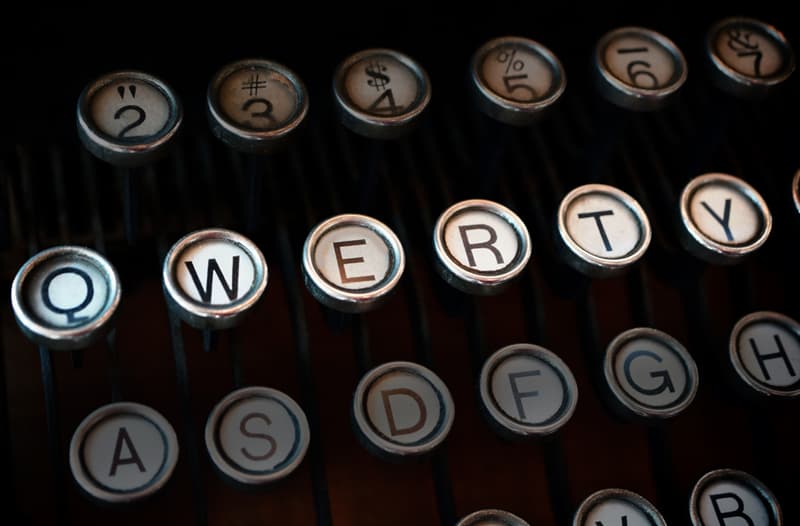 What is commonly called QWERTY (more properly, the Sholes layout) was designed by Christopher Lathan Sholes, then modified through a series of business relationships. Sholes original keyboard was alphabetical and modelled after a printing telegraph machine. The alphabetical layout was easy to learn, but not easy to type on.

For one thing, all practical typing machines of the day relied on mechanical levers, and adjacent letters could jam if struck with rapidity. There has long been a myth than Sholes designed the QWERTY layout to slow typists down in order to prevent this. Nothing could be further from the truth, but Sholes’ first customers were telegraphers. Over several years, he adapted the piano-like alphabetical keyboard into a four row keyboard designed to aid telegraphers in their transcription duties.

This new layout mostly spread out commonly struck keys, but also placed easily confused telegraph semaphores together. This layout was sufficient to permit telegraph transcription to keep up with transmissions and created a growing market.

During this time, Sholes teamed up with several other inventors to form a type-writer company with assignment of all related patents. An association with Remington led to increased sales, at which time another company acquired the shift platen patent that permits a typewriter to type in mixed case, and they seem to have made a few essentially random changes in order to avoid the original type-writer company patents.

So that’s it then, right? QWERTY is crap?

Well, no. QWERTY was based mostly on the needs of telegraphers in transcribing Morse code, and Morse had been scientifically designed to make transmission of English language messages as efficient as possible. The result is that the QWERTY arrangement is pretty good—efficiency wise.

In the 1930’s John Dvorak used modern time-motion study techniques to design his own keyboard, and around it has grown up a whole cult following and mythology. But the fact is, it’s much ado about nothing. Careful scientific studies in the 1950’s, 70s and 80s have shown that choice between the Sholes and Dvorak layout makes no material difference in typing speed. Practice and effort are what yields rapid typing, and studies of professional typists have shown that however well we may perform on timed trials, few typists ever exceed 35 words per minute in their daily work.

So relax. Take an online typing course, practice a little, and relax.

Before the cult rolls in, it is possible that the Dvorak layout is more comfortable or less straining to you, but the science doesn’t support this as a general conclusion. What the science says is, repetitive motion pain can be alleviated most effectively by the proper positioning of of the wrists during typing and mousing, by correct posture, and by varying the work environment (as by using a well-configured standing desk or switching between workstations that use different, but ergonomic, keyboards).

Have you got used to the QWERTY type of keyboard? Can you type with your eyes closed? Madeleine Cheesman
Learned typing on a manual typewriter, with nothing written on the keys. We had to look up at the chart at the front of the classroom. Touch typing about 120 wpm at my peak.

Ruth Tremblay
Madeleine Cheesman, Me too.

littlekitchenmiracles
I learned on an IBM Selectric, but at home, my term papers were all typed on my dad’s ancient typewriter.

Jillian Kearns
It was hard to learn the Querty keyboard. I did get it, thanks to it Laptop makes life easier, Jillian Kearns

Louise Ramsey
Yes, I learned in h.s.in junior year. And could do 60 wpm when I graduated. After using an electric in my first job, that increased to over 95 wpm.

jimsclads
I learned to type on a manual Royal Braille typewriter that transposed to letters on paper and practiced in the dark when I was around 10 or 11. I could type while looking out the window on a starless night and watch the animals coming from the woods to drink from the river.

marymiller
Used to type 84 wpm not sure what speed I type now but I&#39;m pretty proficient on my work computer. Only took typing as an extra credit in highschool. Martyn Sekjer
120 words an hour 4me Kathleen Hartshorne
12 women is great. I used to be able to do that but have slowed down now that I&#39;m not working on computers anymore.

Lynne Cage
Used a manual typewriter for many years, about 120 wpm back in the day Marilyn Chris Scott
Learnt at school and also went to nightschool.Never used it at work.Still remember it even after 40years. Peter Schiefer
I had heard one time that the keys were like that so you could spell typewriter from the top row key. Daniel C. Gallardo
Even on cellphone its presence

txfl
I had heard the QWERTY keyboard was d3signed to slow the typist to prevent the keys from getting tangled. Now, this article says that isn’t true. I have heard of the DVORAK keyboard, but have never seen one. How is it laid out?