Why do bats roost upside down? 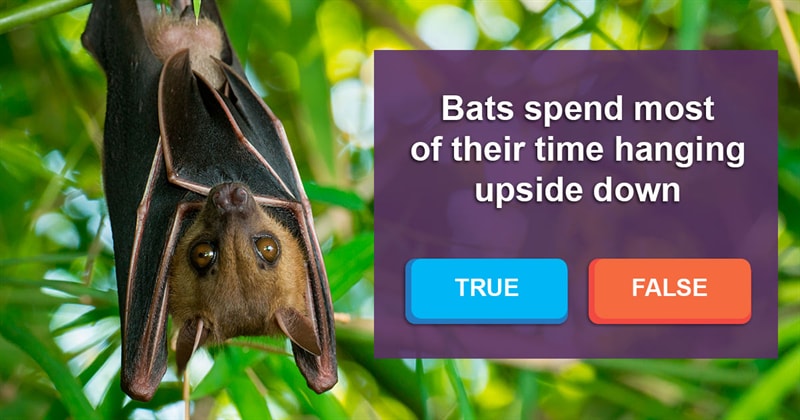 The age old question of upside down bats. Yes, it is awful weird that there is an animal… a mammal even… that hangs upside down. Sure, some monkeys do it when just monkeying around (although… truth be told, monkeys monkey around literally every second of their life) … and a few other tree climbers, like Margays, hang upside down if they are reaching for something; or, again like Margay cat, they may actually even hunt that way...

That article also includes the sneaky and clever way that Vampire Bats feed. I’ll give you a hint: No need to worry about fang marks in your neck. That’s Hollywood hogwash!

But back to bats hanging upside down… Yes, a few other animals will hang, but none actually spend most of their time this way, feeding this way, raising their young this way, and yes… sleeping or roosting this way, except the bats.

There is actually a very good and sensible reason why they do this; very easy to understand, once you’ve been told. I went through an entire explanation of bat evolution that answers this question. Their evolution is absolutely fascinating!

But, for this answer I’ll just wrap it up with the simple reason, in condensed form. They have to hang upside down, so that they can fly. First off, we have to acknowledge that bats are not birds and not insects. These are the other two animals that have true powered flight (as opposed to gliding). The difference between bat flight and bird or insect flight isweight; specifically, the ratio of weight to lift-capacity of the wings. If you walk up to a bird or insect, most species will be able to fly right up into the air from a motionless position, and do it quickly.

Bats, on the other hand (or, other wing), can’t do that. They have a lot of difficulty taking off from the ground (not that they can’t do it… it’s just more difficult). Insects and birds often actually jump into the air to give them a start in the right direction, then their powerful wings take them up, up, and away. Birds have hollow bones. Bats don’t. Insects are made of lightweight chitin or soft light tissue. Bats aren’t. And bats don’t have what you could call “powerful” wings. These amazing creatures are mammals, after all. The only flying mammals. Nature found a way to evolve such an unlikely thing as a flying mammal. So, some compromises had to be made. Bats, once airborne, manage perfectly well in the air, and can literally fly circles around most birds in flight. The problem is in first getting off the ground.

So… to compensate for the extra weight that mammals must have, to compensate for the problem of getting off the ground, evolution found another way for bats to transition from being motionless and them being able to immediately fly when necessary. Evolution said “How about if we drop them from above? That way they are immediately in the air, and all they need to do is start flapping”. It was a great idea, as it turns out! Worked perfectly! Except… bat feet aren’t any good for perching on a branch. They are mammals, not birds, so their musculature, their bones and their tendons are set up in a completely different way. When a bird squats down on a branch, their tendons actually lock their toes into an even tighter grip on the perch. It happens automatically. That’s part of being a bird, and is universal. That’s why they don’t fall off in their sleep.

Bats, as mammals, are set up differently. Therefore, to compensate for that fact, nature said “How about if we have them hang upside down. That way, their tendons will actually pull their toes closed, just like a bird does from the opposite direction?” So… that’s what evolved. Bats hang from the bottom of something, and all they have to do is “let go”, and they are instantly flying! In fact, with this gravity-assist method, they can achieve instant flight even faster than birds, who have to work against gravity!

Side note: In case you were wondering how bats poop and pee while upside down… first off, poopin’ is no big deal. Bat poop looks like tiny grains of rice. If they are hangin’ it just falls to the floor of the bat cave as guano. Pee, however… well, they have that covered too. They just “hold it” until they are flying!

So there you go. Bats sleep hanging upside down because they are mammals, and can’t take off into the air like birds can (at least not without difficulty). But… if hanging, all they do is let go.

** Now… having said all that about upside down bats, I must mention the following:

It seems that not all of the 1240+ species of bats do hang upside down. There are exceptions! About six of them, within two different families. One is in South America (Thyropteridae), and the other is in Madagascar (Myzopodidae). The Myzopodidae, which includes just one species, is exceedingly rare.

So, it turns out that these bats roost inside the tubes of young, unfurled banana leaves, and other similar large leaves. When they attach themselves to the inside of this rolled leaf, they do it heads-up! The problem with living inside of rolled-up leaves is that within a few days, these leaves will continue growing, and eventually open up. Whenever that happens, the whole group of bats has to pick up and move to another home! Over and over again. All six of these species of rare bat have a suction cup on each wrist and ankle, and they use these to attach to the smooth surface of the inside of the leaf tube. Evolution… the more you learn… the more amazing it becomes!

Are you afraid of bats? Do you think that bats' habit to hang upside down is their unique feature? Lourdes Ayala
Loved the info! Love bats also and I know from years of experience that they rarely if ever get in your hair!!

Linda Spreng
Jacqueline Tattam, I&#39;m spiritual, but not particularly religious. At any rate, I didn&#39;t feel that Paulette was proselytizing at all. And I also come here to play quizzes, not to be shamed into believing what you believe. Trust me, dear, that&#39;s how your rant came across.

lmoores
There are bats near where I live. I hear them a lot.

honeyjackson
I&#39;m not afraid of them after this article and knowing that they don&#39;t want to &quot;hurt&quot; me, but I still would get &quot;freaky&quot; if I were insdie a cave and a million bats started flying all over me, especially peeing on me at the same time! Not too cool!t I&#39;d never hurt any animal

christinegardner
GR8 information &#128077; I&#39;ve been on a flying fox in rainforests near Mackay, up with the bats. Awesome experience.

Remedios Prado-Ambrocio
Thanks for the info. Now I have something special to tell to my grandkids when they ask me for stories or explanations on everything.

Chrissie
Jacqueline Tattam, Paulette was not proselytising, just expressing joy and wonder. We have a right to free expression of such things!

james parrillo
Jacqueline Tattam, Paulette Arnold was commenting. She did not curse or talk poorly about another player. People discuss what they are thinking. Some people think about God. Have a great day! Christine, James&#39; wife

lankford smock
Wow bats hold their pee till they fly? Don&#39;t want to be around when they &quot;let it go&quot;.

Carol Butler
Nature certainly has a lot to say. joycekingsmith
Siegfried Proslmeyr, God gave all living the command to &quot;multiply and fill the Earth&quot;...in essence, to create. Everything that God created was intended for good. Don&quot;t blame God for something that mankind perverted or worse...