Why do Canada geese fly at night? 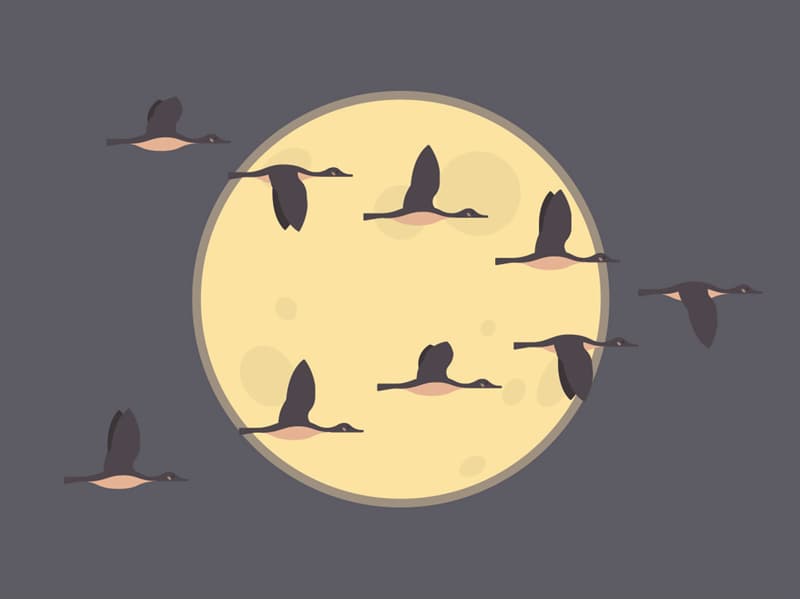 There are actually very good reasons that these geese fly at night! And I will go over them with you. But first… I must point out that any goose you see that is carrying a valid passport from the great country of Canada, may be called a Canadian Goose. All others should be referred to by their actual name, which is Canada Goose, or Branta canadensis, if you prefer.

I can’t count how many nights at 10:00 PM, at midnight, at 3:00 AM, at any and all hours of the night, I have had that all too familiar “Honk! honk-honk-honk HONKhonk HONK HONKhonkhonkhonk HONK honk HOOOONK!” cacophony pass right outside my bedroom window, as the familiar flying-V formations of Canada Geese fly over my home.

Those V formations are quite extraordinary. You can’t tell from the ground, but the lead goose is the lowest of the bunch. Each goose behind is slightly higher than the one in front of it, all the way to the last goose, which is flying the highest. They do this because of the aerodynamics of their wings. The only goose that is using all its wing power is the lead goose… point-man, so to speak. When that goose flaps its wings, it causes a certain turbulence of the air that’s following the wing. The next goose in line benefits from this swirling air, and doesn’t need to apply 100% of its wingpower. The next goose, again benefits from that one, and so on down the line. Flying in formation this way adds 71% more distance that they can fly, than when flying alone! 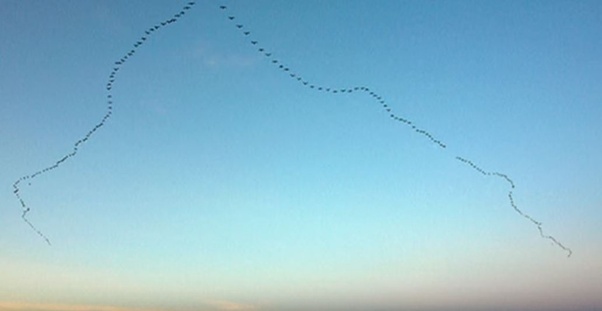 So who gets chosen to be point-man? You’d think the one with the map! Or… the leader? Or the new-guy? No. None of these. They actually take turns. When one gets tired, he will drop back so he can rest a bit and benefit from another goose’s turbulence. When migrating… in good weather… with favorable winds, a strong tail wind… these guys can make up to 1,500 miles in a single day! That’s crazy, man! Hard to imagine, but it’s been done. They are migration masters.

So… the flying at night thing… I’ve already touched upon one of the reasons they prefer the night. It has to do with that turbulence I just mentioned. You see… many other large birds (and these ARE large birds!) use thermals to gain altitude and to soar on. Raptors do this. Hawks, eagles, etc. During the day, the landscape is riddled with all kinds of thermals rising from the ground, all depending on what the surface looks like below; how much heat was absorbed and stored from the sun; if it’s dark or light… or even water. These thermals are great for raptors! Lots of vertical air movement, all over. But geese don’t soar, and they don’t have need to fly in circles. They have somewhere to go. And all those day time thermals are a pain in the butt; doesn’t make for smooth sailing. Plus, they interfere with the aforementioned wing turbulence that they use to keep from tiring. At night, several hours after sunset, the Earth cools and those pesky vertical thermals disperse.

So that’s one reason they like the night. Another reason for night flight is to prevent over-heating (makes sense, right?). Nights are cooler, so birds that expend a lot of energy with constant flapping (as opposed to soaring) take advantage of the cool of the night.

A third reason is also something I’ve already mentioned. Hawks! And Eagles! And Falcons! All those guys are diurnal hunters, meaning they hunt during the day. Which goose in its right mind would want to share the not so friendly skies with something called a “raptor”? Now, if you’ve ever seen flocks of geese on the ground and tried to get amongst them or feed them or something… you may already know how mean and nasty they can get. People have used geese in the stead of watch-dogs. They are tough! Especially on the ground. But falcons, hawks and eagles, hitting them from the air often spells doom. In other words… their goose is cooked. During the day, they often rest and feed and rejuvenate in the water, where they are safe from raptor attack. As long as they stay in the water.

So given the choice, they take the red-eye.

Otherwise…. THIS can happen: WARNING… extremely DRAMATIC footage follows of a falcon/goose battle. Also extremely exciting! Who will win?!


You’ll certainly see Canada Geese fly during the day. But the smart goose prefers the night.

All migratory birds are split up into three classes, regarding migration habits. Nocturnal Migrants, are the first classification, who do so at night. This would include most of the seed-eating songbirds, such as sparrows and thrushes. They will fly all night, then rest up, top off the tank with food, and try to stay out of sight of raptors during the day.

The second group is the Diurnal Migrants, who migrate during the day. These are often the insect-eaters; jays, swifts, swallows, larks, etc. They benefit greatly from the day-time thermals during their journey. But not for reasons of soaring, like raptors use thermals, but rather because these warm updrafts send up clouds of insects from the fields, right into the paths of the migrating birds, like a food delivery service! Most insects are so light that a gust of wind or a thermal current can lift them high into the air – and unwittingly into the beak of a hungry swallow.

And the third class of migrant are those that have a preference, but actually migrate day and/or night, depending on the circumstances. Canada Geese, and many waterfowl, fit into this last category.

Do you see the logic in geese' actions now? Isn't it fascinating how instincts help birds and animals to survive?

lmoores
What fantastic animals birds are. Einar was a silly goose to go flying in the day though. His goose was cooked.

jenmaar
That’s fantastic information I did not know but now I do birds are incredible!!

Wyla Reedy
Amazing to watch. The Background Music happened to be of the same Classical that I was already listening to. Susan Lawrence Dollarhide
Thank you! It was a VERY interesting article. I thought I new something about these interesting birds but I knew nothing. So glad to learn all of these amazing facts. Thank you for sharing.

Jeauxbert
I quite liked this. Thanks for the lesson! goplatinumone
They come to my Lake.

segarolow
Cool. And fun to know. Kathy Taylor
Thanks that was very interesting!