Another story of a true hero: a man who has planted a forest 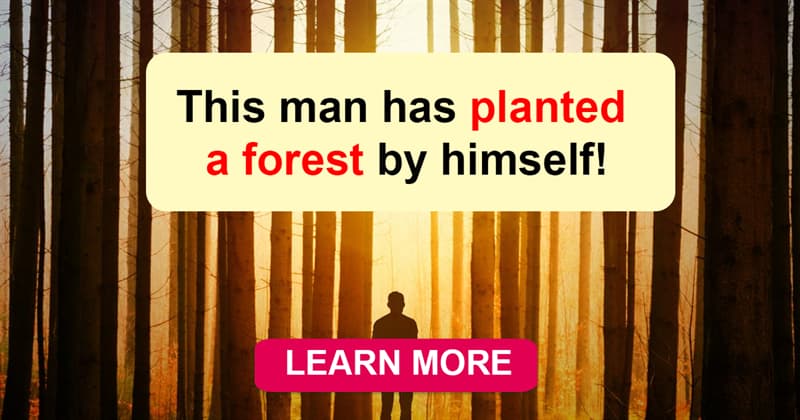 Jadav Payeng became a well-known person not only in his home state of Assam, India, but also worldwide. A husband and father of three children, he is now often referred to as Forest Man.

The Mājuli island used to be the largest river island on the planet, but numerous natural disasters took toll on it. Terrible floods and earthquakes caused severe bank erosion, which can become the reason for the extinction of the island in future years. Fortunately, this land found its own super hero, who decided to help his home island by his own forces.

Jadav "Molai" Payeng started planting trees at the age of 16. To date he, now aged 53, has planted a huge forest, which is bigger than NYC's Central Park. Transforming a vast wasteland into a beautiful oasis, he gave home to numerous animal species, such as Bengal tigers, Indian rhinoceros, deer, birds, and rabbits. Elephants also visit this wonderful forest reserve annually.

Watch this powerful video to find out more about Molai and his amazing career:

This story is very inspiring, isn't it? Have you ever heard about Molai before? What do you think of his life-work? Share your opinion with us in the comments below!

SHARE this article with your friends to INSPIRE them too!

Lauri Kauppinen
I&#39;ve read about this fellow a many a time .

deborahpmercer
This should most certainly be more widely known. Vicki Boicelli
A forest is life and as this man did we should cherish the forest. Deena Grady
Very savvy. Too bad there are not more who see and understand what bad thing destruction of forests is. Replanting and conservation will ensure survival of the earth our home. Lynda Daley
Fabulous to learn about this wonderful man. Kunal Bhattacharya
can you circulate his story through media and TV shows?

linda hill - the purple one!💜
It&#39;s inspiring what one man can do...not just for himself but for other living beings.

robert karel
God made the whole world by Himself! Heather Cameron
What a truly wonderful man with a good heart. We all should learn from him. Robyn Rae Ireland
What an amazing man and an amazing thing he&#39;s doing not only for his island and his country, but for the world: being an example!

ghknives
I think this wonderful. This man would have to be driven in a good way. The trees take time to grow and he has stayed the course to keep planting and nursing them along. Just imagine if we were all did a fraction of what he has done. God bless this man. George Hodges