What are some real cultural differences between Europe and the USA? 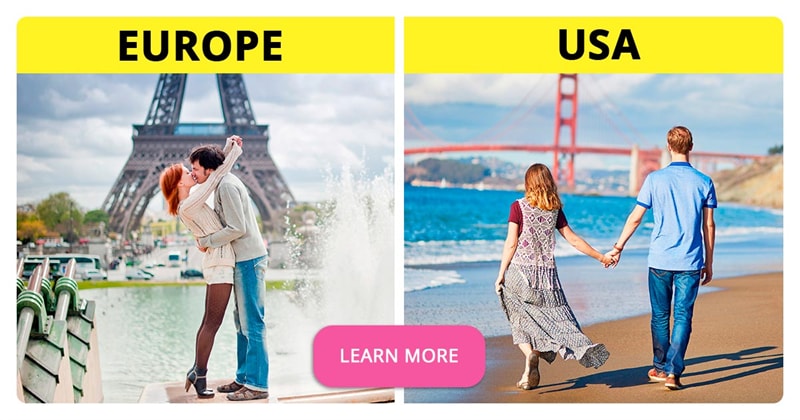 Public display of affection (PDA): In London, I saw a couple almost making out in the bus stop. In Brussels, the couple I saw on the bus did not stop kissing for half an hour until one of them got off the bus. What about the US? Well, not much. I’ve lived in Chicago area and in DC area. Most I’ve seen is couples occasionally just kissing for a second and that is all. Compared to Europe, there is very little PDA, which surprised me a lot. The funny thing I observed was that many of those engaging in PDA were tourists from conservative countries, who thought they can indulge themselves in the US. 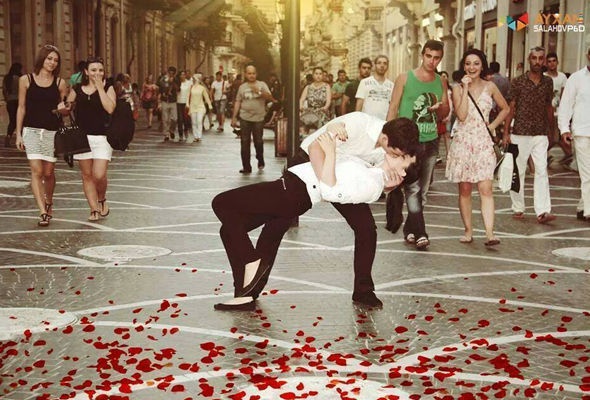 Smoking: That’s one of the things I love most about the US. Very few people smoke. You might even forget how cigarette smells. In Europe, however, left or right, you won’t escape sights of those smoking. But, in the US, brace yourself for something else instead: Weed. You love it or hate it - The US couldn’t have cared less. You live in big cities - Then you’d better get used to its smell. 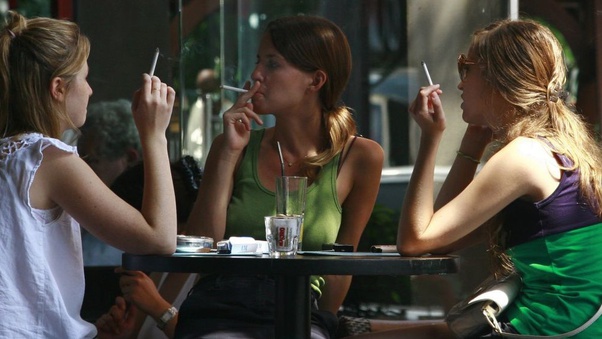 Religion: You feel it more intensely in the US than in Europe. Once I attended my cousin’s orientation at his med school. The dean started her speech with a prayer. I was very surprised to be honest esp. given that I am from a former Soviet country where religion-state separation is very strict. In the US, you are surrounded by different churches, large communities. It is more visible than it seems in Hollywood movies. 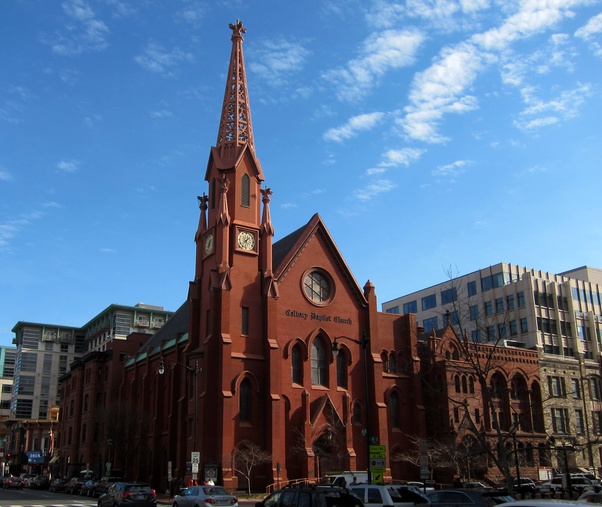 Patriotism: You won’t believe it until you see it: American suburbs with the American flag hanging on all the houses. Motorbikes with 2–3 flags. Americans are patriotic. Remember Trump’s speech on the National Mall on July 4 last year and the jubilant crowd with flags? Yes, that is indeed the patriotic face of America. Europe? Not that there are not patriots in Europe but I can’t imagine a Berlin, Madrid, Prague suburb with tons of flags (these Coronavirus times are an exception needless to say) 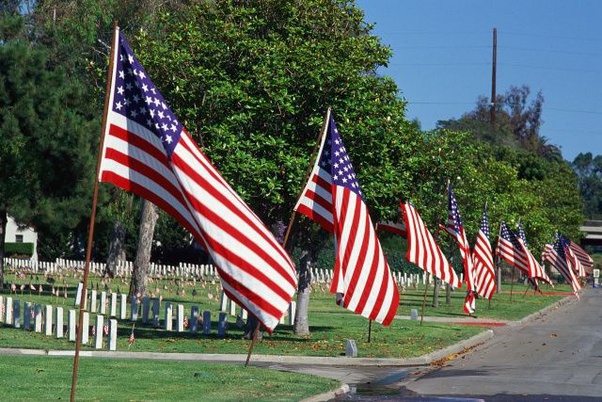 Aesthetics: This one I have to give to Europeans. Europeans have the taste indeed: The way they dress, the way their cars, houses look. From London’s streets to French cars’ design, Italian policemen’s uniform: They are elegant, classy, well-designed, tastefully made. For America, there seems to be one main design standard: Huge. Everything can be pretty, ugly, weird or mediocre but no matter what, it should be big. Cars are huge. Houses are huge. Food portions are huge. But aesthetics isn’t always there. What worsens things is that many Americans have never traveled overseas including to Europe. So, they tend to think that they actually have the best of everything. 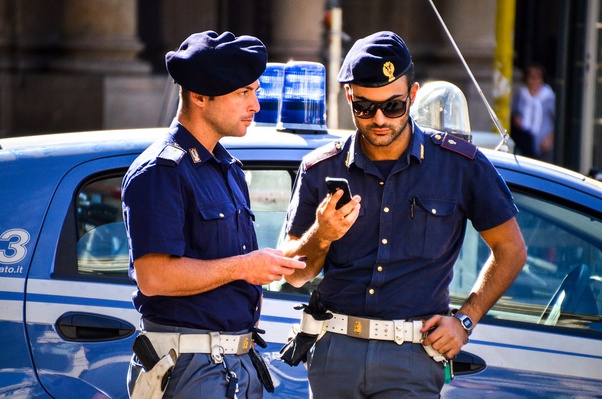 Did you notice any significant differences between American and European cultures?

paula powell
Tal Segal, Funny you say that considering there are more bombings in Europe. When I was there a Manchester concert was bombed. Fact check before you speak.

Jennifer Dyster
I am Australian. I suspect public displays of patriotism because in my country the further right people are the more likely they are to have flags and support mythic rather than factual history..i admire European dress sense, fear American violence, abhore the reliance on the private car but I admire American Arts. I have many favourite American painters, photographers, poets, writers, dancers. The vigour and rigour of Arts training and the pressure to resist snobbery and cross cultural and genre boundaries is mind boggling and food for the soul. I do fear for American culture though . The politics of fear, divide and conquer have overwhelmed other countries which have had strong Arts development. We need Mythos and Techne.

weathernco
Tal Segal, You seem to have forgotten beheading by ISIS in Syria and Libya. The nearly daily battles in the Kashmir region of Pakistan and India .. and I could go on ..

Tal Segal
One needs to mention violence. There is so much of it in the US. Mass shooting, armed robberies, road rage killing, etc. This is almost totally non existent in any Western democracy. (Ironically, Americans often are afraid to travel to other countries because of the dangerous situation they encounter back home)

Gwen Sanchez
American&#39;s are very patriotic, especially those from Texas. Yes we think our country is better. But I&#39;ve been in other foreign countries. They have their own beauty. As for myself I think European&#39;s have several hundreds of years to develop the way they did. I find if you are polite to people, they in turn will be to you. Be grateful for the world in general. We all are alike, we want to live in freedom, live our lives as we see fit. Tell them they have a beautiful country. You will be amazed at how friendly they become. Don&#39;t be a boastful American, you will be amazed at what you will learn.

L Lh Adams
Niranjala Kumari Galhenage, That&#39;s because the rest of You are accustomed to the Government telling you what you can and cannot do. Here,we have freedom,like when I go out back and fire a few hundred rounds. That&#39;s freedom!!! Adriana Zuliani
Australian are quiet achievers. Although it is a beautiful and peaceful continent with a good standard of living and compassion towards the have not, they never brag about this. Australia is the lucky country and I hope it stays this way.

Alan B Mitchell
ibellejones, I&#39;m sorry to comment but as an Englishman I&#39;m struggling to understand your post and what you&#39;re trying to say. Maybe it&#39;s true that we really are two nations separated by a common language. Take care, stay safe.

Pravin Shastri
American patriotism is noteworthy. While Europeans have every reason to be patriotic since their land was actually invaded in both the wars, the US mainland ( not counting Hawaii) was never invaded. Yet the American people rallied round their flag once the call was given by the Govt. This happened in both the world wars and the subsequent wars like Korea, Vietnam, Gulf wars and Afghanistan. nearly a million Americans have laid down their lives in the wars which didn&#39;t threaten their lives or property. If their leaders convinced them that the American values were at stake, the people followed them to the battlefields. Amazing.

Joy Holbrook
I have to admit that I find the American belief that no country in the world compares to America, to be a tad arrogant. I’m Australian and yes, I’ve travelled. I love coming home to the safety of Australia, the sun, the laid back attitude, the friendliness, the free medical system etc. There is a big, wide, wonderful world out there. Madi Marven
I must admit that I do admire the American patriotism,not many countries have that now!

Julie Allen
Julie Allen, The author does now live in the USA but after reading several of his profiles I don&#39;t know how e could make any comparisons.

Julie Allen
How can you compare a country with a Continent. Guess only a yank would do that. haha

ninakamwene
I agree with this article since I have been to 14 countries. With America the word is BIG. Thank you for educating us. Be well. 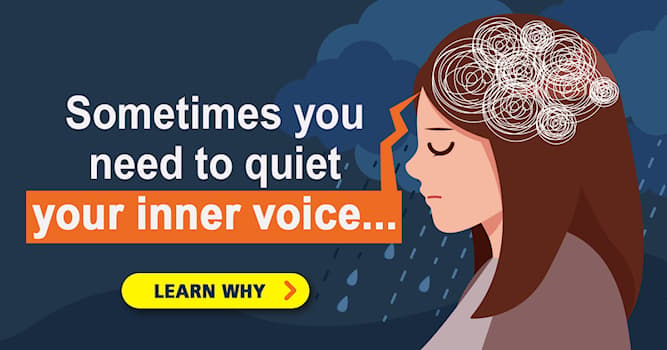 Sometimes it's better not to pay attention to some things at all than to try to deal with everythin the right way. Keep reading if you're interested in this topic.