What is normal in your country but weird in the rest of the world? 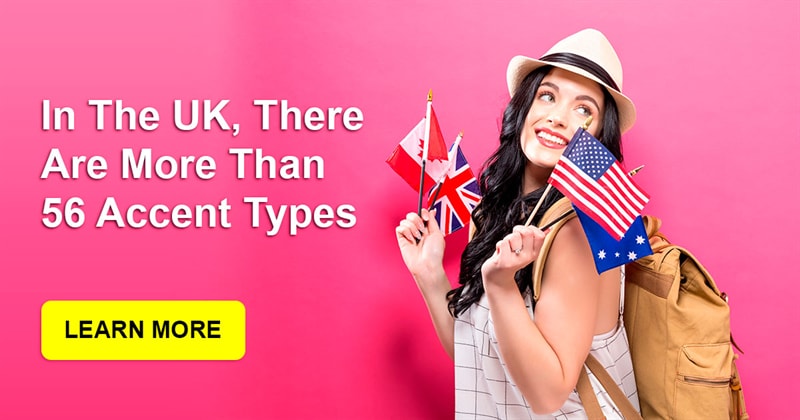 England is fairly small. Because of this, you’d expect that we all sound fairly similar, wouldn’t you? Maybe there might be a bit of a difference between the North and the South, but not much more that that.

Everywhere you go, we sound different. Basically every county has its own accent. And there are 48 counties!

You’ve got the West Country accent, where everybody sounds like a farmer.

You’ve got the cockney accent, which you should use if you ever need to look ‘ard. ‘Yeah, alright geeza, ‘giz a minute an’ I’ll be there.’

You’ve got the Birmingham accent, which is quite hard to describe, but let’s put it like this: I found an article in which 51 English cities were ranked by ‘sexiest accent’, 51 being the worst.

You’ve got the Essex accent, which can be summed up in ‘yeah, ‘e was well owd, innit!’

Then you’ve got the Northern ones; the Geordie accent, the Liverpool accent, the Manchester accent, so many accents!

Northern accents are basically just (sometimes big) variations of ‘Ayup lad, can ya tell me the way t’ Sainsbury’s?’

On that ‘sexiest accent’ thing, the Manchester accent was ranked as #1, but that’s when I realised.

I won’t say what my city was ranked, because, you know, potential stalkers and/or murderers, but it was in the mid-to-low 40’s, which would be fine, except the Newcastle accent is #39! How?!

This map sums it up pretty well, although these regions could probably be split again into even more accents.

And as for the Newcastle thing, I’m only joking, please don’t kill me! I know what you Northerners are capable of! 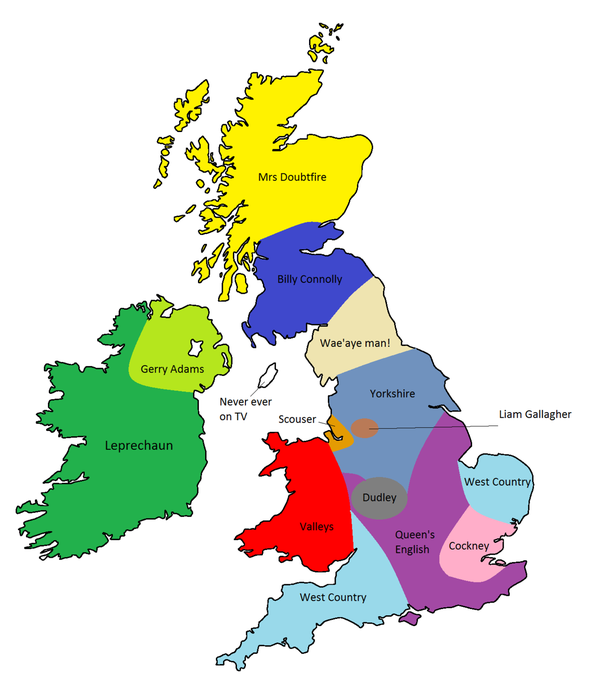 Have you ever been to Great Britain? If yes, did you notice the diversity of accents?

Ian Swindale
As someone brought up on Tyneside (Newcastle and Gateshead you can tell a Northerner from a Southerner by the way they pronounce Newcastle - Newcassle for those who live there and Newcarstle for those who live in the South. My Mother&#39;s definition of a Southerner was anyone who lived south of the River Tees and when I moved to London she thought I&#39;d gone to live on the Moon. When I then moved to Jersey in the Channel Islands I might as well have left the Solar System. Obviously she was a Newcasstle lady born and bred

Tina Marie Haddad Rhodes
I have only known one person from the UK and he spoke with a very proper accent. Best way I can describe it.

gillysamy
Born and live in Scotland and no I have never ever heard anyone with an accent like Mrs Doubtfire. Would be a hoot to have her as my Housekeeper though! Karen Wallace
What a load of bollocks Lorena Arias
Where are people who pronounce “f” instead of “th” from? For instance they say teef instead of teeth. Linda Evers
That map is ridiculous. There are far more accents in the UK than it shows. For instance there are great differences in Yorkshire accents dependent on which part of Yorkshire one comes from. The Barnsley accent is nothing like the Leeds accent, then there are the rural accents in North Yorkshire and yet a different one in Hull!! Laurette Pearlman
According to your map --------Your West Country stretches all the way to Suffolk and Norfolk,completely different AND on the East Coast. As a proud Geordie, our wonderful accent(should be number 1 of course!!!) does not go across to Cumberland, although they do sound similar to a naive ear. Michael Sydney Brighouse
the statement SAYS England not the U K.. mike.

Richard Perkins
papacorndog, America is far bigger than the U.K.

papacorndog
I&#39;m sure you could split America into far more categories than that.

Christopher Brownbridge
PS: Which part of the West Country is East Anglia in, I wonder?

Christopher Brownbridge
It is not true that before the Industrial Revolution people did not move far from their home villages, surprisingly. In following my family tree, I have found many examples suggesting otherwise. As these are usually Agricultural Labourers, I suspect that the reason is that they were hired on at a particular fair, and the new employer farmed in the opposite side of the county from his new employee. There are other reasons, but this would seem to be the main one, at least in our area. Joy Holbrook
Interestingly, the Yorkshire Ripper was eventually caught because of his accent. He began calling the police and taunting them. A speech and accent expert listened to the tapes of the calls and was able to pinpoint the accent to one small area of Huddersfield! Peter Sutcliffe who lived in that area had been questioned previously and let go but he became too arrogant and gave himself away. He was rearrested, charged and found guilty. He&#39;ll die in gaol.