How did the people of Pompeii become frozen? 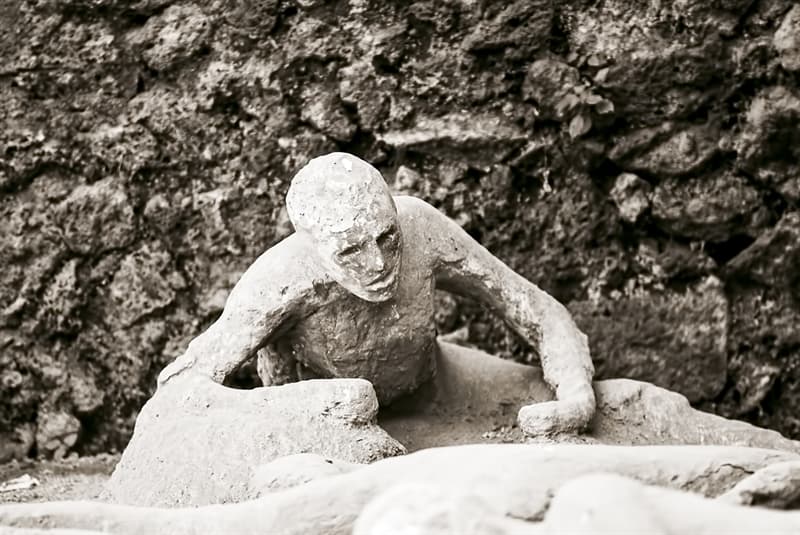 When archaeologists began to uncover Pompeii, they realized that they were finding bones inside air pockets within the layers of pumice and ash and debris. Fortunately they got the bright idea to start filling these air pockets, whenever they broke into them, with plaster that would solidify in 48 hours. They then chipped the pumice and ash and debris away from the plaster. This revealed the plaster in the shape of a body.

That is what we actually are looking at in the Pompeii remains - plaster - not frozen bodies. The bodies have long since decayed leaving only bones. But the pumice, ash, and debris had quickly hardened around the body, like a mold. So when the body decayed, it left its original outline on the hardened material surrounding it. Some of these plaster casts can be startling to look at. They aren't all neatly laid out like the human remains we usually find in graves. They are in various poses. Some lie crawling across the ground. Some sit against walls, their knees up. Some hold each other. So, how did these people die? The people of Pompeii died many ways: burning, suffocation, being crushed by debris.Vesuvius started erupting at midday. Between then and dawn the next morning, about 8 feet (2.5 meters) of pumice rained down on Pompeii - the first half was white pumice, the second half grey pumice. This pumice was like hail. Most of Pompeii's residents left during this part of the event. Some residents were killed when their roofs collapsed under the weight of the pumice. But most of the 2000 people uncovered during the excavations were found above this layer of pumice - indicating they survived this part of the onslaught.The next phase of the eruption was more devastating. It was a mix of alternating pyroclastic flow and pyroclastic surge. Pompeii was farther from Vesuvius than towns like Herculaneum (While Pompeii was buried in 4 meters of pumice, ash, and debris, Herculaneum was covered in more than 20 meters of pumice, ash, and debris). So the heavy flow only reached the edges of Pompeii.It was long the theory that the poisonous gases and lack of oxygen suffocated the people of Pompeii. But the theory becoming more accepted, today, is that they were almost instantly killed by heat during the fourth wave of pyroclastic flow/surge. In Herculaneum, the remains are just burned bones. It was massively hot, there. But the flow across Pompeii was only a couple of inches. It is believed that that shallow flow was enough to raise the temperature of the air to around 550 Fahrenheit (300 Celsius) - killing the people in an instant. The scientists believe that that is what allowed the poses of the victims and explains the contorted postures of some of them.They were then covered, either quickly or slowly (depending on their location), by pumice, ash and debris.

How much do you know about the Pompeian tragedy? You can share any interesting facts in the comments below!

Mario Larue
Nature creates beauty and horror!! It does not differ between good and evil, hell or heaven !! The universe was created (our universe) over 13 billion years ago with the Big Bang: it was a very violent event which produced the world that we live in today !! Our solar system will die in 4 billions years from now the same way!! And there are people walking the streets today who believe we are there forever!! Live today, ENJOY LIFE IT WON’T LAST VERY LONG !! JUST THE SAME, HAVE A GOOD DAY AND LAUGH AND SMILE !!

jack patti go
Our world was created by our almighty God, in Heaven, whom created men and women, and all creatures!❤🙏

Ken Putnam
They were NOT frozen Tom Wright
Been twice. And you would see something you missed every time you visit. A truly amazing place. Very interesting and moving. An experience you would never forget. My advice is ….put it on your bucket list !

Lbow
Andy Johnson, she was the only one, except for the sinners in the 2 cities that burned as though they never existed. Lot and his 2 daughters are the only people who were saved

Lbow
Mario Larue, I think God&#39;s voice is loud but I&#39;m sure it was not a big bang. The earth will not last billion years as it is today but an earth will be here forever!

Joe Mangan
Andy Johnson, no. I saw no salt at Pompeii. James Michaelson
Hmmmm! Not sure about that Jack. The trouble with religion is that it blindly ignores fact, logic and reason.

Doris Dallaire
It’s an amazing place to visit. So is Vesuvius.

Julie Domaille
I have not been myself but my sister &amp; husband took some amazing pictures. A little child in the arms of his mother broke my heart

Grant McIntosh
They are petrified, not frozen. Wilma Tomlinson Mcphail
I thought about this on 9-11. How horiffic.