Why do so many White House rooms have an elliptical 'oval' shape? 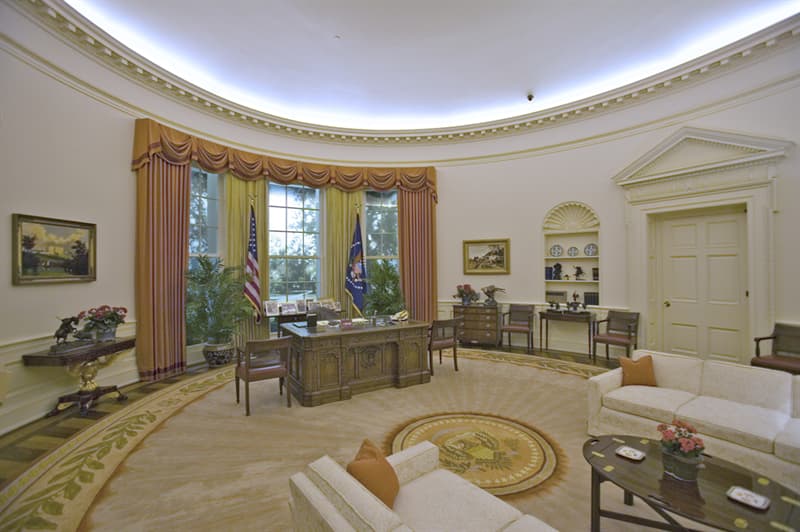 The Oval shape of rooms in the White House was chosen to accommodate a formal greeting ceremony known as a "Levee." The ceremony has its roots in the royal courts of England and particularly France. The White House Historical Association explains how it worked in America.

The levee, a tradition borrowed from the English court, was a formal occasion to allow men of prominence to meet the president. Replete with formal dress, silver buckles, and powdered hair, the event was a stiff public ceremony almost military in its starkness. Invited guests entered the room and walked over to the president standing before the fireplace and bowed as a presidential aide made a low announcement of their names. The visitor then stepped back to his place. After fifteen minutes the doors were closed and the group would have assembled in a circle. The president would then walk around the circle, addressing each man by his name from memory with some pleasantry or studied remark of congratulation, which might have a political connotation. He bowed, but never shook hands. When he had rounded the circle, the president returned to his place before the mantel and stood until, at a signal from an aide, the guests went to him, one by one, bowed without saying anything, and left the room.

George Washington ordered the bowed walls that charecterize the three oval shaped rooms on the South side of the White House residence: the Diplomatic Reception Room, the Blue Oval room on the State Floor and the Yellow Oval Room on the third floor expressly for the Levee. But, the ceremony was only briefly used. The practice was not loved by John Adams, the White House’s first resident. While Adams accepted the reasoning behind the Levee, an efficient way to grant wider access to the President in a manner consistent with his station, he didn't disguise his personal distaste for it. In a letter to his wife Abigail, Adams said simply:

The Levee was promptly abolished by Thomas Jefferson, who saw the ritualized grander of the ceremony as uncomfortably close to the trappings of monarchy from which the young nation had just fought a revolution to divorce itself. The oval shape nevertheless was reprised in the design of the iconic President’s office when the West Wing was built in 1909. The shape of the Oval Office serves no formal purpose except as a homage to the oval rooms of the White House residence, reinforcing the sense of awe for the power wielded within its cornerless walls. Have you ever wondered about this? Was the answer surprising or not? Roberta Hall
I always thought it was because the government can’t cut corners!!! Steven Aldrich
I thought it was to drive the president nuts. When he misbehaves you tell him to stand in the corner for 5 minutes Geraldine Frances Thibeault
You can&#39;t back the president into a corner in an oval room

Sim
It’s oval because the government can cut corners!

tbear
To be truthful, I never gave it a thought! 😊👍

Ziggy Sigouin
Rooms in oval shape so the politicians run circles around us. Sabine Dauzier
(continues) As per the intent of the Founding Fathers that every citizen be equal to all others, the oval shape precludes the formation of such knots, keeping all present on the same line all around (literally) the room, and thus equally visible to the president.

Sabine Dauzier
Hazelyn Dillon, I&#39;ll hazard a guess. Washington requested the rooms be made oval expressly for the Levee ceremony, during which the guest all stand in a circle. Corners would tend to create knots of people, pushing some behind the first line. (next) James Stroud
good to know i f you want to be in the know....or no. marymiller
Interesting story and the comments were hilarious.

karen twirly
Clever comments. I needed the laughs. Thanks!

Cheryl McMeekin
Interesting, had no idea Wally Forrester
Tony Sakalauskas, Krishna Mohan Mishra, so the crooks that live there can’t get cornered.