If men have XY and women have XX, what would happen if scientists created a YY human? 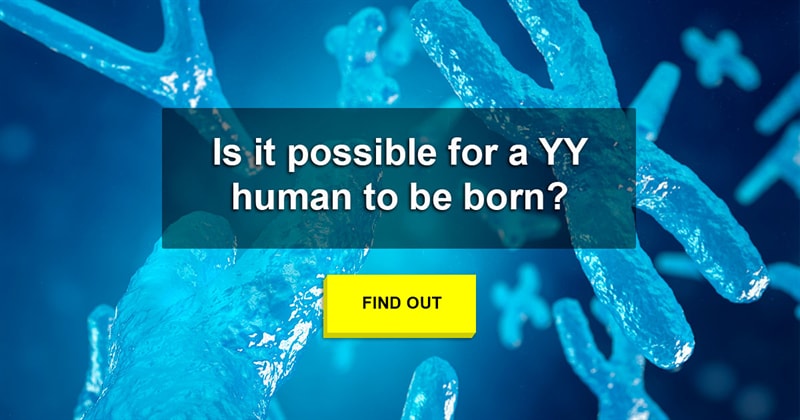 The default sex for every human being is female. The only thing the Y chromosome is good for is turning people who would otherwise be totally female into men. That’s literally all it’s good for. The X chromosome, by contrast, is the one with all the vital organ-building information, including information on how to form organs unrelated to sexual reproduction. The X chromosome is a bit like your heart: everyone needs one and everyone who’s alive has at least one. Technically speaking, men and women actually have the same organs; the Y chromosome just causes those organs to form differently in males. You see, sex is genetically determined at conception, but, in the first few weeks after conception, the embryo has no anatomical or hormonal sex. You can’t tell a male zygote from a female zygote by looking at it. It’s what we call “undifferentiated.”

Eventually, after the first few weeks, the Y chromosome kicks in in males and they start to develop male primary sex characteristics, such as a penis and testicles. Meanwhile, females continue to develop without the Y chromosome, causing them to develop a uterus, ovaries, a vagina, and a vulva. Here’s a diagram showing human sex differentiation: In any case, there would probably be no benefit to having a second Y chromosome anyway, because having two of the same chromosome generally doesn’t have much of an impact. Women usually have two X chromosomes, but very early in fetal development, one of those X chromosomes in every cell is inactivated. Again, the X chromosome is kind of like your heart: you need one to live, but you only really need one and having a second one is mostly just redundant. (Sorry Time Lords!)

Have you ever wondered why we can't have the YY pack of chromosomes? Did you know that the default sex for every fetus is always female?

bipolarintrovert
So, it should be called the &quot;why&quot; chromosome then? Since we only need men to produce MORE men, technically, this world could be a very peaceful place. No wonder they are so touchy. If I knew that I literally had only one unique (although not necessary otherwise) purpose, I&#39;d be touchy too.

Scott
Interesting. Keep it coming QC. I am learning so much! Palmer Scott
Cindy Schaub, please read a bit before making such a comment. There are XYY and XXY males, as there are XXY females. Genetics is a lot more complicated than just XX and XY! Jan Ashbaugh
So we women really do rule the world!! Cindy Schaub
dawnbartlett, There can not be a second Y chromosome. the egg would never develop into a fetus if there were a 2 Y chromosomes. No X = No organs and there are only 2 chromosomes. It can&#39;t be YYX - it can only be XX or XY. Vicki Cane
If someone is an XYY it’s called a “super male” and the vast majority are found in the prison system, so not redundant and of no effect. And an XXY is infertile ( Kleinfelter male), As is an XO or Turner female. Lu-Anne Murdoch Anderson
I did know that we all start out as females. Very informative.