What is the difference between a dead and live virus? 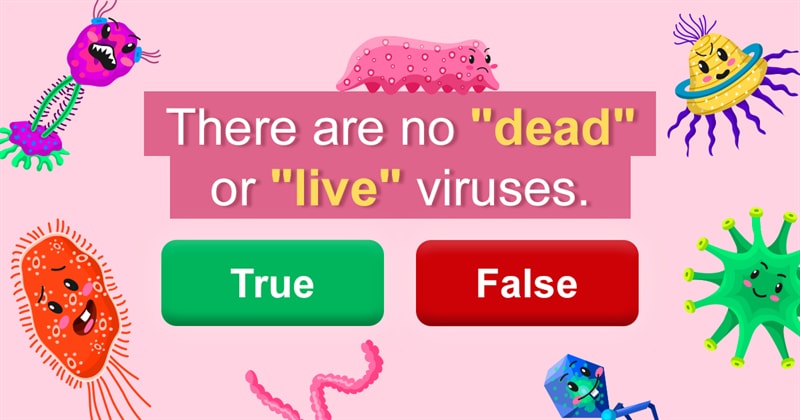 There is none, because viruses aren’t alive.

A virus straddles the fuzzy boundary between living and dead. That’s why biologists and doctors talk about “inactivated” or “attenuated” viruses, not “dead” viruses.

It’s helpful to think of a virus as a machine. In fact, in a lot of ways, it’s a machine that’s simpler than your car. What’s the difference between a living and a dead car? None, because cars aren’t alive.

Cars can be working or not working. You can, for example, pull the spark plug wires, or drain the gas tank, or fill the intake manifold with Silly Putty, and a working car will become a not-working car, even though they look pretty much the same.

Inactivated viruses are a bit like not-working cars: some part of the machinery has been changed or damaged to make it not work.

Your body’s immune system does not recognize the entire virus. It looks for and recognizes certain parts of the virus, called “antigens” or “antigen subunits.” As long as just that part is intact, it doesn’t matter how badly damaged the rest of the virus is.

By way of comparison, if you open the hood of a car, melt the engine into slag, and then close the hood, people walking down the street will still recognize it as a car. They’ll see it and say “yep, that’s a car,” even though the engine is totally destroyed. You can take the wheels off and people will still say “yep, that thing I’m looking at is a car.”

Your body will look at the outer shell of a virus and say “yep, that’s a virus,” even if the genetic material is completely destroyed (or entirely removed altogether). You can take parts of the virus off and your body will still say “yep, that thing I’m looking at is a virus.”

Are you familiar with the term "dead virus"? Santos Josemari
Not getting any quiz trivia these past days.

hector tubens
Loved the information. Learn something new every day.

ninakamwene
Loved this general explanation of viruses for the lay people. Thank you. Raymond Cardona
Yes I knew viruses were dead that&#39;s why there is no cure for a lot of diseases such as the common cold that are virus related or caused.. That&#39;s also why antibiotics don&#39;t work on viruses. Bonnie

ninakamwene
I am so grateful that you explained viruses in a way that lay people can understand. I spent years studying this unique and brilliant &#39;machine&#39;. They help us get information into the nucleus. And that is good. Thank you.