Who would win in a fight between Superman and the Hulk? 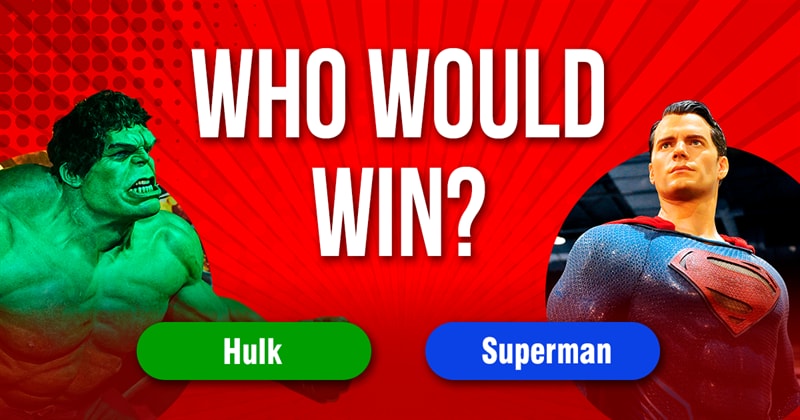 Ordinarily I would call this fight for Superman as eventually he would realize that Hulk just gets more powerful the more angry he gets and back off until he calms down. That is the only rational way to beat the Hulk under normal circumstances. You defeat his anger.

According to DC's pre-crisis canon Superman has incredible power for a Kryptonian. Superman is so powerful that in order to properly function he has to put in place mental blocks or limiters to his strength so that he is not a danger to everyone around him.

According to Marvel canon Hulk has nearly limitless power equal to or exceeding his anger. He gets more angry the more he is hurt and when he is losing. Hulk can recover from almost any injury which again makes him angrier.

Skip to the end for the summary.

Durability: Superman has survived numerous attacks in the past that are quoted as being of equal power to a supernova and has experienced some even more powerful attacks.

Speed: Superman is capable of Faster Than Light travel and can bend space-time around himself to go even faster. He can even go so fast he can leave our universe if he unleashes all of his barriers.

Weaknesses (Not including depowering ones):

Strength: Effectively limitless depending upon his emotional state. "The madder Hulk gets, the stronger Hulk gets." Starts out at roughly 100 tons of lifting capacity.

Durability: Hulks body will mutate as needed to compensate for any external threat including crushing pressure underwater, the surface of the sun and outer space as long as he stays mad.

Speed: Hulk is capable of Superhuman speeds of several hundred miles per hour and can enter low Earth orbit through jumping. He can then also survive the re-entry from low orbit.

Weaknesses (Not including depowering ones):

I think I have to give this fight to Superman with one caveat. Superman would do everything he could to not kill the Hulk. Superman is faster and smarter and has a wide range of utility abilities at his disposal that Hulk cannot compare to. Hulk has no limit to his strength and is effectively immortal so long as he remains angry. Unfortunately Hulk also starts off much weaker and cannot easily increase his strength on demand.

This is how I see the fight playing out.

Hulk likely starts this fight with a good punch to Superman which he shrugs off as pictured above. Superman ever the reasonable one, tries to talk Hulk down but this only makes Hulk angrier and results in stronger punches. Superman might start out with a few blows to test the Hulk's strength making Hulk very mad at the "Little blue man". Hulk would lash out at him in return. Superman would then realize he needs to cut out some limits and ramp up in strength. Hulk would get angrier because he is "Strongest there is!" and match Superman.

Eventually Superman would move the fight to another planet possibly one of Jupiter's moons as he did in Superman vs The Elites. He doesn't want innocents to be harmed in the coming fight. He might take some serious blows from Hulk while trying to drag and throw him to IO. Superman would then leave IO and do an extended sundive to power-up. While he is performing his sundive he would be cutting out his limits like he normally would to prepare for interstellar travel.

Hulk would get very angry at being left there alone "Hey! This fight not OVER!" and jump off towards the sun. Strong as he is he might be moving pretty fast but nowhere near Superman's speed. At this rate it might take Hulk a while to get back to Supes.

The now overpowered and unlimited Superman would fly back toward IO at near light speed and do an Infinite Mass Punch on the Hulk that is now hurling through space.

With Zeptosecond precision, Superman would break off his attack at the exact moment when Hulk is about to be killed. He would then throw the unconscious Hulk somewhere on Earth that is deserted and pleasant to rest.

Hulk can be overcome if he is attacked with a sufficiently strong attack to beat his resistances before he gets too angry to shrug off the attack. Superman on the other hand can willingly remove all of his barriers and boost himself with solar energy at will. This lets Superman ramp up his power faster than Hulk can boost his anger effectively beating Hulks resistance to damage. The Hulk on the other hand for all of his strength just isn't fast enough to even hit Superman easily.

Just for reference, all three times they have actually fought in the combined Marvel / DC comics Superman has won. Lynne Mills
Darlene Davidson, you hit the nail on the head. Well done. 😂

Michaeljoseph
Just reading the reviews doesn&#39;t reassure my comfort level.. Most people haven&#39;t received their orders! What a shame! Theirs way too many unscrupulous business operators on Facebook lately! Be careful!

Ilias Tsiabardas
Superman all the way !!!!!👌