How many light years away from the Sun are we? 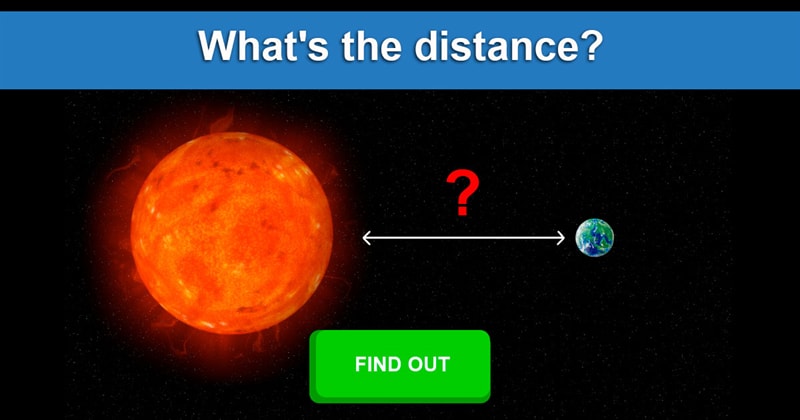 But instead of typing 149597870700/9460730472580800 into Google for you (yes, Google can serve as your calculator) let me show you how you can estimate the answer to this question reasonably accurately without looking up anything or using any calculator, so long as you remember two useful numbers.

It is not hard to remember that the Earth-Sun distance is roughly 150 billion meters; that is, the digits 15 are followed by 10 zeroes.

It is also not too hard to remember that a light year is roughly 10,000 trillion meters; that is, the digit 1 is followed by 16 zeroes.

The error is due mainly to the fact that the light year is overestimated by more than 5%, so we underestimated the ratio. “Boosting” that 15 parts in a million by an extra 5% gives 15.8 parts in a million, which is actually quite accurate. But at this point, you’re probably better off using a calculator after all.

Can you imagine how huge is the distance from the Earth to the Sun? Jim Mascair
I don&#39;t see why we would measure our distance to the sun in light-years or meters. Stephen Foster
We are 8 light minutes from the sun. For light years divide bu the number of minutes in a year.

rodb
why would you measure the distance to the sun in meters? Louis Nardone
The earth is 93 millions miles or 150 millions Km from the sun. As far as I know Tom Kitchen
Thought I was really gonna learn something.

Dan Drinkall
Or perhaps how wide the Milky Way is in Feet !

Dan Drinkall
Isn&#39;t that explanation a bit like informing us of how many inches it is from here to Timbuktu, or Paris ? Nina Greco Clyde
It took a lot of work to figure out what I always knew. It is about 8 minutes and 15 seconds away.