What are some interesting facts about genetics? 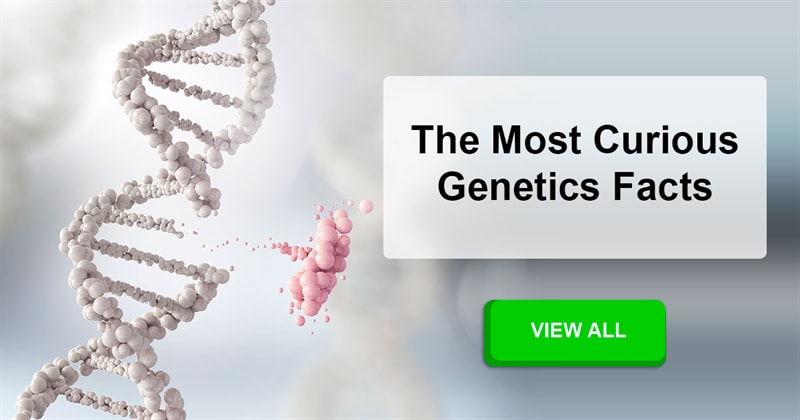 2. Cheetahs were almost wiped out by the last ice-age, and all modern cheetahs are descended from a small portion of the surviving cats that interbred to maintain their species. Because of this, cheetahs are practically genetic clones of one another.

3. The great majority of cancers, some 90-95% of cases, are due to environmental factors. The remaining 5-10% are due to inherited genetics.

4. About 40% to 50% of the genetic information found in our GI tract does not match anything that has ever been classified before, not plant, animal, fungus, virus, or bacteria. We have no clue what it is. Biologists call it “biological dark matter.”

6. A species of fruit fly was kept in complete darkness for 57 years (1400 generations) showed genetic alterations that were favorable to survival in that environmental condition.

7. Some women can have a genetic mutation that makes them tetrachromatic, which causes their eyes to have four different types of cone cells, enabling them to see 100 million different colors compared to the roughly one million colors most of us can see.

9. There is a genetic disease called the Laron syndrome that results in short stature, longer life expectancy, and near immunity to cancer and diabetes.

10. Blue-eyed people probably have a single, common ancestor, who had a genetic mutation between 10,000 and 6,000 years ago.

11. About one in every 4 million lobsters is born with a rare genetic defect that turns it blue. Sadly, these prized critters rarely survive to adulthood. After all, a bright blue crustacean crawling around the ocean floor is simply easier for predators to spot.

12. One single group of 55 chimpanzees in West Africa has twice the genetic variability of all humans combined.

13. Sickle cell anemia is actually a genetic mutation and is an adaptive advantage to people living in malaria infested areas. Humans with one of the two alleles of sickle-cell disease show less severe symptoms when infected with malaria

14. Through In vitro fertilization (IVF) you can pick the sex of your child, screen for chromosomal abnormalities, and get a pre-implantation genetic diagnosis/screen (to prevent an inherited disease or other genetic defects).

15. Blonde hair is not exclusive to Europeans. Melanesians of the south Pacific evolved a different gene for blonde hair.

Which fact do you find the most surprising? Caren Rounthwaite
Read THE BOOK WOMAN OF TROUBLESOME CREEK. It’s based on the Fugates. Judy Wilson,

bina sarmah
Excess oxygen-poor hemoglobin causes a dark blue complexion and can happen to both gender.

Gary McLean
I&#39;m not convinced about all these so-called factual statistics Connie Broussard Richard
This is impressive. Thanks for all the information.

Nancy Gardner
Very interesting, I was amazed to hear that some women see so many colours.

Judi Hanan
Very interesting. I was surprised that 90-95 percent causes of cancer is environmental. I just thought a greater percentage would be hereditary.

greene
Learn something new every day Nina Hamilton
Some women having a genetic mutation so they can see 100 million different colours, is surprising.

vasily tchaikovsky
nice to read, but #3 it is not our time data ,90-95 % cases of cancer -environmental factors -sound funny for me soviet ,dictator, .Stalin should be happy to read this sending genetic scientist to jail

Barry Crews
I don&#39;t really believe the one about blue eyed people. Thought it was due to the amount of melanin present in the body...