What is the most dangerous substance in the world? 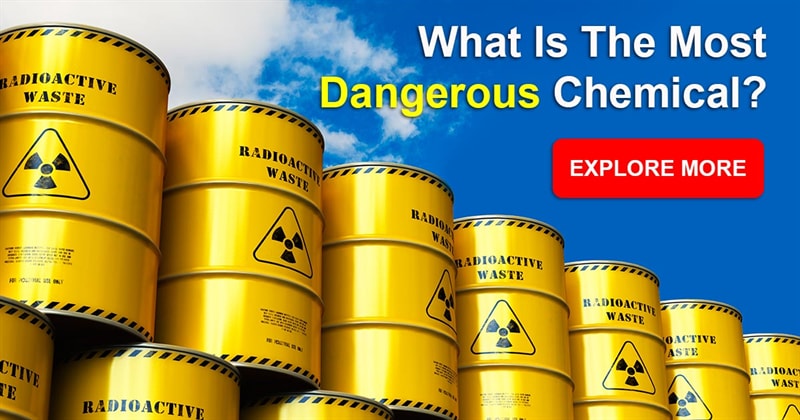 Chlorine trifluoride is hideously, insanely, exuberantly reactive stuff. It will cause almost anything you can think of to burst into flame on contact. Steel, ice, asbestos, sand, anything. About the only material you can store it in is copper, because you get a thin layer of copper fluoride on the surface and it won’t react any more than that. Be careful, though! Handle it wrong and it’ll change its mind about playing nice in copper.

Oh, and the byproducts of it burning on contact with—well, anything, really—are chlorine gas and hot hydrofluoric acid. Fun!

I think it can be ruled out of the running for Most Dangerous Substance, though, because it’s actually used in industry. The semiconductor industry uses it to clean circuit boards.

As exuberantly reactive as chlorine trifluoride is, dioxygen difluoride is worse. It will not only burn vigorously on contact with just about anything you can name, it will do so even at absurdly low temperatures, like going on liquid nitrogen temperatures. It’s a molecule that really really really really doesn’t want to be a molecule, and will without provocation dissociate with vigor, yielding rather a lot of excess energy in the process.

If you want pure evil incarnate, the kind of substance that nightmares are made of, look no further than dimethylmercury. The existence of this stuff is incompatible with the idea of a benevolent creator who loves his creation. Dimethylmercury is an organomercury compound that at room temperature is a clear liquid that looks like water. But understanding its properties will give you nightmares for weeks.

It’s not explosive. It doesn’t spontaneously burst into flame. It doesn’t do anything dramatic. It just sits there.

Inhale just a little tiny bit of it or let a tiny drop of it fall on your skin and you’re done. That’s it. Game over.

Oh, but it’s not a quick death, oh my no. You’re dead, and nothing can save you, but it will take months for you to die. And during those months, it’s in your brain, destroying the myelin sheath around your neurons, slowly causing your brain to disintegrate. You’ll die very slowly, in agony, as your mind goes to pieces.

And it gets worse. It will pass right through materials like latex. Researchers have died handling it in a fume hood and glove box just by spilling a drop of it on their gloves.

As far as I know, nobody will work with it any more. It’s just too damn dangerous. People make chlorine trifluoride in industrial quantities, you can buy it from chemical supply houses, but nobody, and I mean nobody, wants to work with dimethylmercury.

Do you think these chemicals are really the most dangerous ones in the world? Greg Parsons
I would have thought human male sperm to be the absolute worst substance known to humankind.....just look at the carnage it can cause.

Vimala Padmaraj
FRANKLY I KNOW THE MOST DANGEROUS &quot;SUBSTANCES&quot; ARE POLITICIANS - LIKE IN THE USA AND INDIA.

Bruce Cassamajor
hector tubens, You create that devil, not her mom and dad. You devil, man handle her.

Bruce Cassamajor
Marian Spitzig, in your kitchen , bathroom, garage, back yard. where ever you can go , you will get no rest , they will follow you. Ah Ha!

aamconsultantsllc
Just googled it - calibrate radioactive magnetic resonance devices but it can be replaced with alkali salts Sammis,

aamconsultantsllc
Hope they are not preparing us for any eventualities Peggy Mills,

aamconsultantsllc
I vote for hysterical estrogen as the most dangerous

namiphi
Good to know I had no idea.

vasilemihaela
Many articles about all kind or dangerous things ,but nothing about who has make decisions or who is in charge of such things